I Ran Into Some Trouble 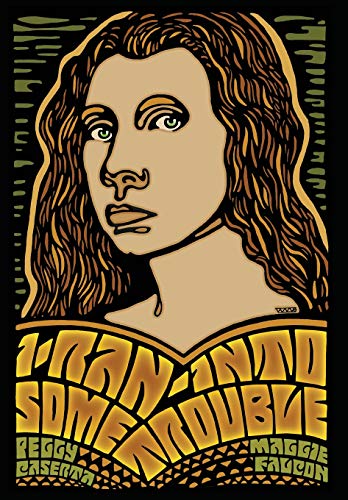 Born in the forties and raised an only child in a middle class family in the fifties’ South, Peggy Caserta grew up in an era in which girls received little education and then worked only until they got married.

She graduated from a community college and became a flight attendant with Delta. However Caserta discovered early on that being a “stewardess”—as they were called in the sixties—was not for her when she got nauseated on all her flights.

She then switched to a ground crew job with Delta and left her parents in Louisiana for the west coast, specifically San Francisco. Learning early in her twenties that working for others would not be in her stars, Peggy decided she wanted to be an entrepreneur.

So, while still working for a while for Delta, she opened up a clothing store in the Haight-Ashbury district of San Francisco, at the peak of rising hippiedom. Her mom was an excellent seamstress, so she would airfreight blazers and other stylish creations from Louisiana (thanks to Peggy’s Delta job which she kept while launching her store,) to create a line of unique garb for flower children. Mnasidika was Peggy’s rapidly growing boutique.

Peggy Caserta once negotiated an order with Levi Strauss & Co., then a local San Francisco business, for the very first flare-leg jeans, which Peggy amateurishly sketched on paper, on just a handshake. This proved to be profitable for all parties concerned.

At one point, Peggy outfitted The Grateful Dead as they began their illustrious career in the sixties.

Mnasidika’s success led to meeting every possible sixties’ music and art icon who visited or lived near the Haight-Ashbury district. That success also led to an assortment of drugs into an escalating habit.

Woodstock 1969? Absolutely; Janis Joplin arranged to have Peggy flown in as one of the only non-musicians permitted onstage.

Janis Joplin, Peggy’s friend and lover, gave Peggy her first mainline taste of heroin, to which Peggy became instantly addicted and from which Janis later on died in October 1970.

Matter of fact, while with Peggy at Muir Beach weeks before she died, Janis requested that her ashes be scattered at that beach. Peggy was sort of spooked out by that request, and weeks later, Janis was gone. Peggy said, “She knew. Some part of her knew.”

Several personal overdoses and dealings (drugs and otherwise) with numerous questionable and dangerous characters while trying to maintain Mnasidika and several other San Francisco businesses, ultimately landed Peggy into the danger zone of life in the fast lane.

Gang rapes and then further sexual assaults when trying to run away from the gang rape? Sure. Peggy implied that her “Triple-Ds” were both a blessing and a curse.

Prison breaks in Mexico? Yes, but through the prison’s sewage system. One sensed and smelled the disgusting experience of her companions’ sloshing through urine- and feces-filled tunnels.

Drugs and life rendered her fearless.

Then came several court-ordered rehab programs, from which Peggy often just walked away, only to be caught later on, all the while continuing with her drug dealings. Beyond heroin, she found Dilaudid to be an acceptable and “safer” substitute.

After several health dangers, including being in a coma and being on life support in 1995, she had had enough.

Peggy finally realized the importance of family. While her dad had passed, her mom was aging and needed help. Peggy grew tired of the shady life of living on the fringes and headed to Mississippi to help her in 2005, just in time to experience the first-hand devastation of Hurricane Katrina.

In 2011, Peggy survived a bout with sepsis and appendicitis, when it was believed she was too old for a kidney transplant and would have to live the rest of her life on dialysis. Nope again; she eventually rallied with improved blood labs which showed normal kidney function.

Like the old Timex watch commercial, Peggy Caserta “Takes a licking and keeps on ticking.”

Gritty, disconcerting, and genuine are the best adjectives to describe Peggy’s life experiences. No secrets, no lies, and in your face, always determined to do things her way. Be prepared for shocking details and truths from a brilliant yet addicted, and now, hopefully, recovering mind.

The quintessential book for Boomers, as well as for anyone interested in learning about hippies, the sixties, and the Woodstock generation, I Ran into Some Trouble by Peggy Caserta and Maggie Falcon will not disappoint.