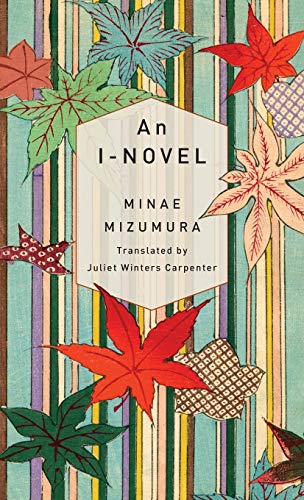 What is an I-Novel? The I-Novel is a literary genre in Japanese literature. It refers to a confessional narrative construct in which the events in the story correspond to the events in the author’s life. At its core, its intention is to expose aspects of society or of the author’s life within a particular society. But it is not a memoir. And it does not feel like a memoir, even though in the case of An I-Novel by Minae Mizumura, the protagonist’s name, ethnic and familial background, are exactly the same.

If anything, it is a style that reimagines the memoir by borrowing from fiction to remake the past, to redefine it so that the internal can take center stage in conversation with the world as seen by the author. In doing so, it attempts, and mostly succeeds, in feeling like fiction. Sort of.

As the morning poked through cracks in the blind, I reached out from the mattress on the floor and inserted the telephone plug into the wall jack, wearily cognizant that another day had begun. No sooner had I done so than the phone rang, giving me a start. Fear shot through me. It might be the French department office.

—Is this Minae Mizumura?

—What on earth are you doing?

If they asked me that, what could I say? I could not explain it even to myself. And I was terrified that somehow the way I was living—holed up in an apartment that was dim all day long, like a snail coiled tightly in its shell—might become exposed to the light of day.”

The recounting of the mundane day to day, heightened by the internal musings of the narrator create a bridge that, when well-done as in Mizumura’s An I-Novel, is in itself of feat of literary construction, creating the fourth wall even as it demolishes it. Erasing the narrative line separating fiction and nonfiction, the imagined and the lived.

This is a talent she surely honed with her earlier work, Zoku meian, (Light and Dark Continued) a controversial work in Japan because it picked up where Natsume Soseki’s unfinished last work left off and finished the story brilliantly. Imagine. A woman. A young woman. Stepping into a (male, of course) master’s shoes and succeeding in her own terms, her terrific ability to make stream of consciousness concrete and compelling in ways reminiscent of another Japanese acclaimed author, Huraki Murakami, but without the adolescent male fantasizing and fetishizing of gender violence directed at young women.

Rather, An I-Novel is about family and identity. About how the drive for happiness in a foreign country (success, achievement, love) and the force of family separation and displacement impact those two, often resulting in years-long intense emotional isolation similar to the one undergone when mourning a lost loved one.

“Snow . . . snow falling heavily . . . heavily and silently, piling ever deeper. Not these dry snowflakes flying in the wind like desert sand, but 牡丹雪 botan yuki, “peony snow,” flakes full of moisture, falling like heavy round flowers. I still remembered the chill of them landing on the palm of my hand—so I think, at least. Or is my memory only an illusion of a memory? And as I remembered or tried to remember that chill, amid the hush of large flower-flakes falling heavily I could make out a line of snow-covered thatched roofs stretching back and back and back, blending into distant white mountains that merged in turn into a sky lit white by the snow. Such a rustic winter scene might now be forever lost, existing only in folklore or on travel posters of the national railroad company, and certainly I myself had never seen anything like it; yet as I imagined the scene spread out before me, snowy mountains in the distance, my chest tightened with nostalgia.”

Yes, Mizumura can certainly write a scene, even with nothing but snow and nostalgia. But there is more at stake here. In the Japanese version, the novel is interspersed with English-language lines and words to show what happens to language (and the soul that calls upon it) when between cultures. Words are the chosen tool of the author to create that distance in a way that can be shown, measured, seen, and so, felt. But when translating to English, it fell upon translator Juliet Winters Carpenter to find a way to, literally, translate the abstract intention, the emotional subtext of the author’s intention. She chose to do it visually, by boldening the text that would have been translated, rather than just writing it in Japanese. In other places, the original Japanese typeface is used. In others, it is white space.

This is consistent with the novel’s use of visuals such as black and white photos that look as if taken by a regular phone camera, the kind you might take in a rush of a place you are leaving quickly and want to remember: the alley behind your dorm, snow falling, a bundled up homeless person on an otherwise empty sidewalk, the entrance to your campus. It is all in all a book about language, not always written, and when author Tash Aw calls it, “a landmark of contemporary Japanese literature, finally brought to English-language readers by Juliet Winters Carpenter’s titanic feat of translation,” he is not wrong.

In another beautiful scene, Mizumura‘s narrator looks at the alley that flanks her apartment building, a strip usually populated by prostitutes who were nice to her. They are gone and she misses them now, with the entire alley snowed in and almost fully covering the parked cars in it. And then, she sees this:

“. . . and then through those glittering bits, from beyond those distant snowy mountains in my mind, running barefoot through the blizzard came a horde of yamamba, crones kicking and prancing. These mountain women of Japanese folklore had risen from their graves to run madly in the dark of night. Wild hair streaming behind them in the gale, they sprinted over the ridge and down into the valley. That one was my grandmother, that one my great-grandmother, over there was my great-great-grandmother . . . before me I saw these women from the past, women with whom I shared a bond of blood. They were singing a rousing nagauta refrain:

Oh, how thrilling is this mountain journey . . .”

And so, you have choices. You can read An I-Novel as a great example of the Japanese I-Novel trend in literature. You can read it as a feminist literary landmark, or to inspire a conversation on language and its role in bridging the differences that distance forces upon people who love each other. Or you can just read it for the gorgeous prose, and it would be more than enough.