I Know An Old Lady Who Swallowed A Dreidel 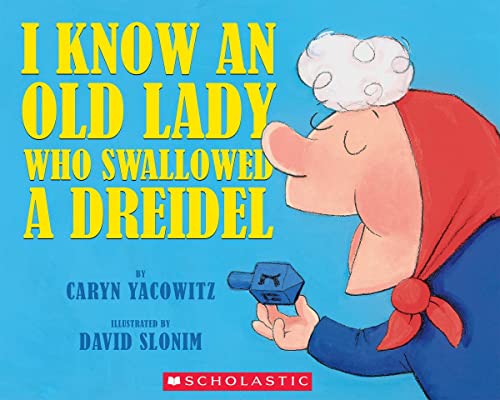 “there is a sense of exuberance in both rhyme and illustration. It’s that energy that makes the book fresh and fun."

Caryn Yacowitz puts a new spin on the old lady swallowing the fly by turning the rhyme into a Hanukkah story. Instead of a series of progressively bigger animals, this old lady, a red-scarfed Bubbe, swallows things all associated with the holiday. The objects don’t make much sense in terms of size the way the animals do in the original. It’s not that kind of logical progression. The author does make the objects bigger, but that feels unnecessary, a nod to the original rhyme rather than having any narrative sense here. Why would swallowing an enormous menorah help with the previous mountain of gelt that was eaten? It would actually be more funny if each thing were its regular size. Together they could be having a party inside Bubbe’s tummy.

As it is, the logic as the rhyme builds isn’t clear, and a child who wants to be able to predict the next object by guessing what would work will be disappointed. The reader has to simply abandon themselves to the author’s whimsy of casting a Hanukkah story this way:

“I know an old lady who swallowed a brisket.

A twenty-ton brisket! She thought she could risk it.

She swallowed the brisket to soak in the sauce.

She swallowed the sauce to sweeten the latkes.

She swallowed the latkes to fry in the oil

That bubbled and tumbled, ’bout ready to boil.

She swallowed the oil to wash down the dreidel,

A Chanukah dreidel she thought was a bagel . . .

The illustrator, David Slonim, adds another dimension by framing each new object as a reference to a painting, most familiar masterpieces such as Munch’s “The Scream,” Whistler’s “Mother,” Rodin’s “The Thinker,” Hopper’s “Nighthawks”—all get a nod. Once a parent or teacher notices this, they can help the child guess which painting is being recast. They’re all well enough known to be easy to identify except for one, the colored candle reference to Ellsworth Kelly’s “Spectrum II.” The Artist’s Note at the end explains Slonim’s thinking. He “wanted the art parodies to help the book transcend Chanukah, speaking of the universal experience of family gatherings and celebration.” Since the paintings chosen don’t allude to that at all, it’s hard to see how that happens. Does Rembrandt’s “The Anatomy Lesson” suggest loving coziness to you? Nor does the combination of old master paintings put a “fresh take on an ancient holiday.”

The art does provide extra visual interest however, and that’s always a fun element to see in a book. While the story really has nothing to do with Hanukkah except to link the objects being swallowed, there is a sense of exuberance in both rhyme and illustration. It’s that energy that makes the book fresh and fun. The last page featuring Matisse’s Dance with the whole family in a happy circle is the one place where the art and meaning truly work together, drawing the story to a satisfying close.