I, John Kennedy Toole: A Novel 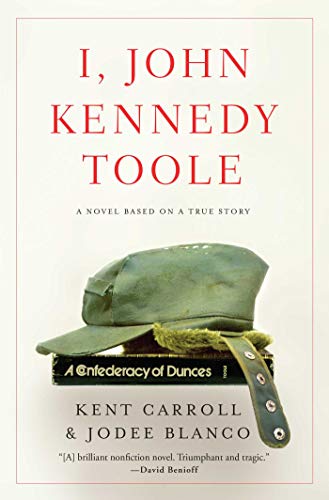 “I, John Kennedy Toole is a fascinating mix of fact and fiction, albeit highly plausible fiction. It gets inside the mind of a tortured genius—or at least a genius in his own mind—and should offer encouragement to writers everywhere . . .”

Most literary aficionados know at least the outline of how the Pulitzer Prize-winning novel A Confederacy of Dunces came to be published: Its author, John Kennedy Toole, penned the farce about Ignatius J. Reilly, whom critic Henry Kisor of the Chicago Sun-Times dubbed the “Don Quixote of the French Quarter,” but then took his own life, despondent over his inability to find a publisher.

The novel gained its title from an essay by satirist Jonathan Swift, author of Gulliver’s Travels, who wrote, in his “Thoughts on Various Subjects, Moral and Diverting”: “When a true genius appears in the world, you may know him by this sign, that the dunces are all in confederacy against him.”

After Toole’s death, his mother Thelma found the manuscript and somehow managed to find a home for the novel at Louisiana State University Press. The rest, as if to prove the truth of Swift’s aphorism as applied to both Ignatius and Toole, is history, including critical acclaim and a posthumous Pulitzer Prize.

And now we have, to borrow from Paul Harvey, the rest of the story. In I, John Kennedy Toole, authors Kent Carroll and Jodee Blanco deliver parallel stories of Toole, Ignatius, and the discoverers of Toole’s brilliant literary work. And who better to tell the story than Carroll, the editor at Grove Press who gambled by acquiring the paperback rights to Dunces from LSU Press just before LSU launched the hardcover.

Carroll and Blanco originally intended to write a biography of John Kennedy Toole but found themselves frustrated by a dearth of documentation to legitimate a nonfiction book. So, they did what any creative types would do: they novelized the story, using what information was available and, “As for the rest, we used what our research did reveal, filling in these gaps as John Kennedy Toole might himself have if he were telling the story.”

Even though the authors say they are telling the story as Toole might have, one can’t help but hear a bit of Ignatius Reilly in the narrative. It’s likely that Toole, in writing Dunces, injected some of himself into Ignatius, and now Ignatius was returning the favor.

Like good storytellers, the authors start in the middle, with Toole’s 1969 suicide in an isolated spot near Biloxi, Mississippi, fresh off a cross country drive that took him from New Orleans to the west coast, six years after first submitting his masterpiece. “His fate had rested on the whim of a renowned editor. His offering was rejected. He was bowing down no more.”

Sitting in his blue Chevy Chevelle, he wrote his final words, a letter to his mother Thelma, in a Big Chief notebook. Then he ran a garden hose from the tailpipe of the car into a rear window. Engine on, a copy of The Collected Works of Flannery O’Connor on the seat beside him, John Kennedy Toole waited for death to bring him peace.

His last thoughts, the authors tell us, reading Toole’s mind 50 years later, were of his mother. “[H]e didn’t think she’d mind about the [letter’s] grammar. As the carbon monoxide filled his lungs, he thought, perhaps just this once, she wouldn’t judge him.”

From that blue Chevelle outside Biloxi, Carroll and Blanco go back in time and introduce the beleaguered Toole and his tortured relationship with his mama. Kenny, she called him. With a degree in hand from Tulane, Toole traveled north from his New Orleans home to work on a master’s degree in English literature at Columbia. He also spent time as a professor of English at Southwestern Louisiana Institute (now University of Louisiana at Lafayette), taught English to raw recruits at Fort Buchanan in Puerto Rico, and taught at Dominican College, an all-girls school near Tulane.

All the while, he pursued his novel, with a character who had a love-hate relationship with his mother reminiscent of Toole’s with his. It was while he was at Fort Buchanan that Dunces really began to take shape. “He pushed the lever on the typewriter to the left, delighting in the clicking of the carriage. Then he escaped into the New Orleans he didn’t tell his mama about, the one that breathed life into characters that were alien anywhere else in the world.”

But the story turns dark when Toole seeks a publisher, and the futility of a literary world not yet ready for Ignatius Reilly weighs on his mind. Robert Gottlieb at Simon & Schuster showed interest, but Toole was unable to “reconcile the editor’s vision with his own.” Or with that of his hero. “Ignatius cried foul, baffled by the editor’s inability to appreciate his godlike mind.”

Rejected and broken, Toole sinks into a depression that ultimately leads to his suicide. But after his death, a new hero arises, in the unlikely form of Toole’s mother, Thelma, who shepherded her son’s masterpiece through to publication by LSU Press. And a Pulitzer. And vindication for her son. For Kenny.

The authors sagely pose the key question all those who know the story behind the publication of Dunces wonder about: Did the drama and mystery behind this book contribute more to its success than its literary merit? They even speculate whether that, more so than depression, drove Toole’s suicide. What if, they envision Toole wondering, Dunces was “that one song for him and no one would ever hear it? The more this worry took hold, the more his fascination with posthumous fame deepened.”

I, John Kennedy Toole is a fascinating mix of fact and fiction, albeit highly plausible fiction. It gets inside the mind of a tortured genius—or at least a genius in his own mind—and should offer encouragement to writers everywhere to treat rejection not as “no,” but simply as “not now.” The trick is to still be above ground when “now” makes its arrival.