Before I Grew Up 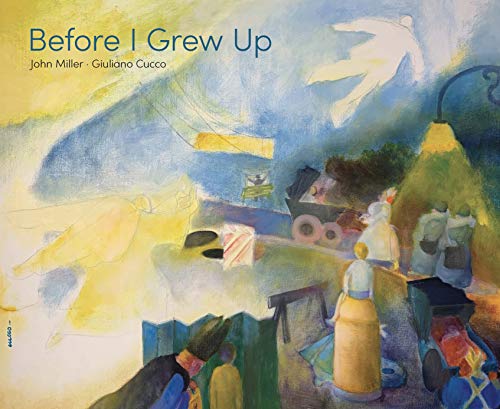 “Thought provoking and surrealistic in some places, evocative and strange in others.”

Before I Grew Up is an unusual creation. The story, written by John Miller, is based on the life of the illustrator, Giuliano Cucco. The two had worked on previous picture books together and were good friends. When Cucco was killed in a street accident, hit by a motor scooter, Miller decided it was time to tell his friend’s story of how he became an artist. Taking paintings already finished by Cucco, Miller wove a story that matched the images.

Predictably this works well in some cases, less well in others. A painting of a child holding up a mirror to the disapproving scowls of a group of adults accompanies this text:

“My mother was tall and very beautiful. She talked to me a lot, especially when she stood before her oval mirror.

“We invented a game with a yellow rag doll. I would hold up the frame of her mirror, and she would try to toss the doll through it. I would keep score.

“We played this game over and over, until my uncle, aunt, and the family priest, who came to dinner every Sunday, grew tired of watching and said they had to go.”

Sure enough, on the left side of the page, a tall, elegant woman holds up a yellow doll with an overly long arm. But any child reader will want to know how anything can be thrown through a mirror. The doll would hit the mirror and fall, possibly breaking the glass. What kind of game is that? The words read like someone earnestly trying to come up with a convincing explanation for a strange image.

Other pages work better, particularly the ones featuring the artist’s father. An image of a faceless man on a bike heading down a bright yellow path goes with these words:

Having established the father as a silent loner, the ending of the book weaves together the disparate images into a theme that makes sense of them all:

“One evening, when I was about twelve years old, my father carried his oars down to the water. . . .

“When he returned home, he said the ocean was so calm that he stood up and played the violin.

“Here’s a picture I painted from what he told me.

“After, I asked him if I had painted the light he was seeking.

“My father wasn’t much of a talker, but this time he said these three words: ‘Yes, you did.’

“From then on, I knew I would grow up to be an artist.”

The text may be too spare and abstract to resonate with young readers, but it works well as a mysterious picture book for adults. Miller has succeeded in offering a memorial to his friend by telling the story of how creativity is nurtured and developed. The haunting art does the rest of the job, encouraging readers to make up their own stories to go with the arresting images. Thought provoking and surrealistic in some places, evocative and strange in others.