I Greet You at the Beginning of a Great Career: The Selected Correspondence of Lawrence Ferlinghetti and Allen Ginsberg, 1955–1997 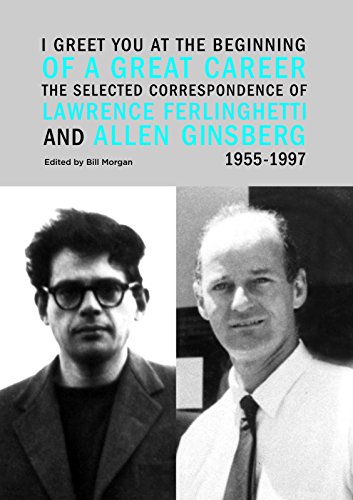 “This is a thoughtful, thought-provoking little book that is well worth your attention.”

When, on April 5, 1997, poet Allen Ginsberg died of liver cancer in New York City, across the country in San Francisco, poet, playwright, publisher and owner of the City Lights Bookstore Lawrence Ferlinghetti worked out his grief at the loss of his dear friend by writing a new poem, “Allen Ginsberg Dying:”

It’s in all the paper

It’s on the evening news

A great poet is dying

It was a voice that Ferlinghetti knew better than most.

It was, after all, Lawrence Ferlinghetti who wrote Ginsberg the now-famous telegram that gives the book its name: I Greet You at the Beginning of a Great Career. To which Ferlighetti, in sending the telegram, added, “Please send manuscript.”

(Ferlinghetti, of course, in sending his wire, borrowed the phrase himself from what Emerson had said to Walt Whitman once upon a literary afternoon.)

That telegram aptly encapsulated Ferlinghetti’s feelings upon hearing Ginsberg read from his early work in some San Francisco lecture hall some of the poems that, together, they would conspire to put before the American public in the little volume of what Ginsberg called “posey” in the book called Howl and Other Poems.

And now, with the collection of the two men’s correspondence, 1955–1997, the public is being given the chance to see the inner workings both of the men’s decades-long friendship and their business partnership that brought beat poetry to the world.

There are insights aplenty, as here, when Ginsberg, on board the USNS Sgt. Jack J. Pendleton writes to Ferlinghetti upon first seeing a copy of Howl:

“I shuddered when I read the poetry tho, it all seems so jerry-built and sloppy and egocentric, most of it. ‘Greyhound’ looks fine, I’m glad you told me to put it in. Reading it all through I’m not sure it deserves all the care and work you’ve put into it and the encouragement you’ve given me, in fact to tell you the truth I am already embarrassed by half of it, but what the hell, thank you anyway for all your courtesy and I hope a few people will see it with such jaded eyes as I do, tho I guess it’s best the poems have a truthful fate than an over-sympathetic one. I wonder if we will actually sell the thousand copies.”

Which just goes to show you how wrong a poet can be about his own work. Or it’s sales potential.

After all, the day would come, on a few years later, when Ferlinghetti, representing Ginsberg more or less as an agent, would write:

“The latest offer for Selected Ginsberg is from New American Library who offers $50,000 advance to you! I’ve not answered that but figured your attitude was still the same, not wanting to get into that sort of Establishment yet?”

By the end of his days, Ginsberg would become very open to dealing with NAL and other major publishers, but stayed loyal to Ferlighetti and City Lights Books.

It was, after all, Ferlinghetti who published him when no one else would, and Ferlinghetti who risked everything when, on June 3, 1957, San Francisco policemen raided City Lights and arrested the store manager, Shig Murao, for selling Howl, as well as a magazine named The Miscellaneous Man, which was published out of Berkeley from 1954 through 1959 with poet William J. Margolis as editor.

One of the great disappointments in this otherwise fine text is that lack of correspondence between Ferlighetti and Ginsberg concerning the court trial for obscenity that Ferlinghetti faced.

But there is this, from a letter that Ginsberg wrote to Ferlinghetti from Morocco in June, 1957:

“I remember your speaking of troubles with local [San Francisco] police on Henry Miller—and not being able to beat the cops on that—is it possible also in this case? It was funny before but could be very difficult, for you, you actually stand to risk so much, money. In any case if you get fined I’ll try to help raise loot to pay it—you’ve put yourself out financially very far already.

“Had awful fantasy of being in San Francisco and putting on big reading sponsored by State College at museum and inviting cops and ending in big riot scene. I wish I were there; we could really have a ball, and win out in the end inevitably.”

While Ginsberg stayed on in Morocco with William Burroughs and others, Lawrence Ferlinghetti and manager Shigeyosi Murao had their day in court while the headline in one local newspaper shouted: “Cops Don’t Allow No Renaissance Here!”

Critics, academics and artists stood with Ferlinghetti, and he and City Lights were exonerated. As an added benefit of the trial, the works of Henry Millar, which had been censored by the city of San Francisco were also found to be art and not pornography.

Ginsberg rewarded Ferlinghetti for his loyalty not only by staying with the micro publisher long past the time in which he was established as a poet, but also by bringing City Lights Books other writers like Jack Kerouac and William Burroughs. And the book sings at the mention of their names, as when Ginsberg writes:

“Am writing Kerouac’s agent to send you K’s poems and complete Burroughs manuscript. Read latter through and have first choice. Jack and I both agree he is as good as either of us—you make big mistake to pass him up. DIG BURROUGHS HE’S A BIG GENIUS.”

You make big mistake to pass this book up as well. As these two great men meet young, dream, scheme, publish, argue, fuss, fume, and repeat with each new book, each manuscript that Ginsberg uncovered from other poets here and there that he insisted that Ferlinghetti publish. As they grow older, until, more than anything else, they just fuss.

“I have high blood pressure from multiplicity of commitments and anxiety over doing them all. I just can’t rush any more. Taking it easier and sleeping more and sitting more regularly and no salt and cut diet and so feeling better than New York.”

I Greet You at the Beginning of a Great Career: The Selected Correspondence of Lawrence Ferlinghetti and Allen Ginsberg 1955–1997 is a long title for a little gem of a book. For all poets and what few readers of poetry remain, it is a must. For the rest, for those in whose minds those first few lines of Howl remain floating in freeform memory (“I saw the best minds of my generation destroyed by madness, starving hysterical naked/dragging themselves through the negro streets at dawn looking for an angry fix/angelheaded hipsters burning for the ancient heavenly connection to the starry dynamo in the machinery of night . . .”) it is a rather joyful addition to the sagging bookshelf in the back bedroom.

This is a thoughtful, thought-provoking little book that is well worth your attention.