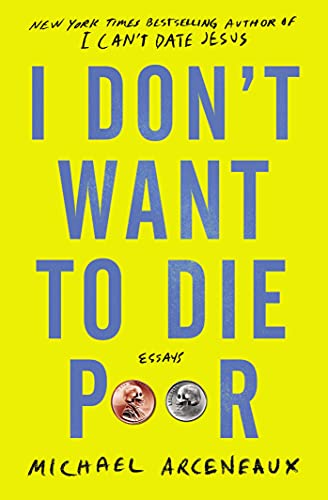 “I Don’t Want to Die Poor is an excellent critique of the way that our society encourages people to try for more, and then punishes them for doing so.”

The United States is a nation of mixed messages. We are told that we can be or achieve anything we want, and that we are limited only by our own aspirations.  We are also told that a university education is one of the surest, most reliable routes toward upward mobility. Yet when ambitious young people are admitted to top-tier schools, only to find themselves burdened by crushing debt after graduation, suddenly the messages become very different: Why didn’t you go to a state school? Why didn’t you go to community college? Apparently, America is the land of opportunity, but only for those who can afford to pay for it.

Michael Arceneaux takes on these contradictions in his collection of essays, I Don’t Want to Die Poor. Drawing upon his own experience (though carefully buttressing that with research), Arceneaux writes about the battle he has had with monthly four-figure student loan payments since his graduation from college in 2008 up through the present day.

I Don’t Want to Die Poor is at its best when Arceneaux discusses the day-to-day travails of struggling with the debt burden. Some of these are obvious, such as the pain of receiving telephone calls from collection agencies if he falls behind on payments. Less expected is the way in which the debt complicates his relationship with his mother who, as co-signer of the loans, becomes responsible for them if he should default. His mother both supports his desire for a better life and resents the burdens his debt has imposed upon both of them. One day she explodes under the pressure, shouting, “You self-centered bastard.”

Fortunately, much of the book is lighter in tone. Arceneaux frequently makes fun of himself, as when he claims he was motivated to apply for good schools in order to impress a handsome college recruiter, or when he entertains the thought of paying off his loans by becoming a rent boy catering to foot fetishists. Instead of pursuing this allegedly more lucrative option, he remains mired in debt, and tells himself, “Well, you went to college for X, Y happened instead, so I C your Black ass better figure out some other shit fast ’cause ain’t nobody rich round this way.”

Race plays a huge role in Arceneaux’s story where his own experience exemplifies larger issues. Black Americans, already possessing less wealth than whites, are at a disadvantage in funding college educations. As Arceneaux points out, “Black students take on 85 percent more debt than their white counterparts and, by virtue of American racism, find themselves paid less . . . after they leave college.”

As a gay man, Arceneaux’s sexuality plays a less central role in his story. He describes the issues it raised in his family (particularly with his devoutly Christian mother), and dissects the portrayal of black gay men by the media and entertainment industries; but in most of the book, being gay clearly does not complicate his life in the way that race and debt do.

Still, there are moments when that debt even inhibits his ability to date, as he cannot get over a certain amount of embarrassment—or even shame—at being in his mid-thirties and still struggling. In one passage, he describes dating a handsome and more financially successful man. They have common interests and seem to enjoy each other’s company, yet Arceneaux can feel himself “shrinking.” He writes “[Chance] made me feel like such a broke nigga by comparison. I have listened to too many R&B songs in my life not to know you don’t want to be that person.”

Here, the intersections of race, class, and sexuality are clear. Masculinity is associated with power, and even in the post-Obama years, power is associated with wealth, a white power establishment, and the ability to get the girl. To be black, gay, and financially insecure is to be triply disenfranchised.

I Don’t Want to Die Poor is not without its flaws. It has its clumsy patches, and the book is full of slang and pop culture references that make it very much of the moment, but which may not age well. Arceneaux also points out that he knows the book will attract criticism from those who think he should have made other, less expensive choices in the past. That brand of criticism is precisely the point: I Don’t Want to Die Poor is an excellent critique of the way that our society encourages people to try for more, and then punishes them for doing so.