Before I Burn: A Novel 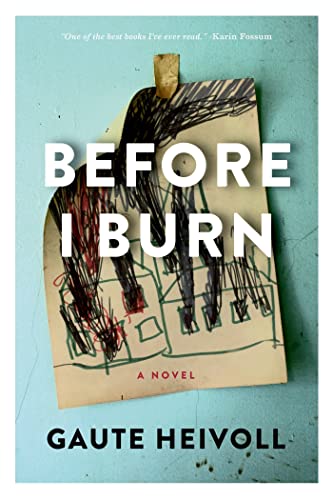 “. . . a masterful novel of levels and depths, beautifully written and stunningly realized.”

Before I Burn by Gaute Heivoll starts with a conflagration in which an arsonist is glimpsed by an elderly woman whose house he has set ablaze. Actually, the flames are preceded by a preface in which the author tells a century old story. The author doesn’t know if the story is true, but he finds it heart-rending and, perhaps, love-filled.

A man commits suicide with dynamite and “afterwards, it was said, his mother went around gathering the fragments in her apron.” But this isn’t the start of the novel either, because the first mover is a poem by Par Lagerkvist that warns “. . . a flaming cloud . . . consumes everything./ Then everything is changed/ and you yourself are changed/ and what you thought had value before/ has no longer any value for you at all.”

In southern Finland, in the small town of Finsland and its surrounding farms, ten arsons are ignited between May 6 and June 5, 1978. These fires are historical fact, not fiction, but serve as the inspiration for the novel.

Needless to say, we wonder who would hurl these lightning bolts down on the good, hard-working, and carefully drawn families of Finsland. But the novel is no more than launched when the author tells us directly who committed the arsons.

Can this be explained by the author’s unusual entry into the novel as a character? Gaute Heivoll is from Finsland and lives there today. Not yet two months old when the first of the fires scorches scrub brush and thicket, he is baptized on June 5, the day of the final blaze. In his origins, even in the image of the baptismal water and the extinguishing of the last fire, there is a connection that speaks of mystery. But how did he come to write this novel in which the events of 1978 interweave with the author’s early life and his process of writing and self-exploration?

At 12:07 A.M. on June 5, 1978, a dark car was seen speeding toward the Kristiansand Cathedral where the author would be baptized later in the day. If the driver was the arsonist, as was feared, he left the Cathedral unscathed.

In 2009, on a visit to his elementary school, the author finds a pile of black and white photos from when he had been a student. Looking at a photo of a small boy singing on a stage, Heivoll abruptly registers that he is that small boy. He writes:

“That was when it all started . . . It was as though I understood yet didn’t understand that it was me. . . . But that was when the story of the fires made its reappearance, as a kind of extension of this discovery [and] led, a few weeks later, to my realization one evening at the beginning of June that I would attempt the story of the fires. It was like taking a deep breath.”

Early on in this mapping of self and fire, Heivoll tells of going to Mantua in northern Italy to take part in a literary festival. When he is to speak in a suffocating hall, in a masterful description reminiscent of Odysseus confronting the shades in the underworld, Heivoll feels suddenly ill and hallucinates that in the audience are familiar faces from Finsland—faces of the dead.

To contemplate the dead is to wonder at the role they played among and for the living. Since soon enough we too shall pass from what we are and what we know, such contemplation encompasses the effort to discern our place, our role, our meaning before we burn.

In August 2005, as Heivoll finishes writing a novel about Friedrich Jürgenson who tried to interpret the voices of the dead, he has the opportunity on Finsland Day to take a helicopter tour. From the heights, Heivoll looks down to see his old school, the Cathedral, and the sites of so many of the fires.

Above the cemetery where his father is buried, he turns around and realizes that the man who travels with him on this tour is the arsonist. He has served his prison time and has now been released. This is the closest Heivoll will ever come to the man.

Before I Burn is a masterful novel of levels and depths, beautifully written and stunningly realized. In the capsule of the helicopter, author and arsonist soar above the landscape that has played a role in shaping each man. If this helicopter ride ever occurred, for what Heivoll recounts is a masterful weaving of fact and imaginative flight, it is a fitting vantage point to piece together the beloved body of Finsland.

Far below are the life stories of both men, one filled with a creative flame and the other whose literal infernos tormented the family and community that nourished him. At the last, having been long with fire, we take more meaning from the concluding lines of Lagerkvist’s fine poem: “And you walk through the ash of everything/ And you yourself are ash.”