I am Malala Yousafzai (Ordinary People Change the World) 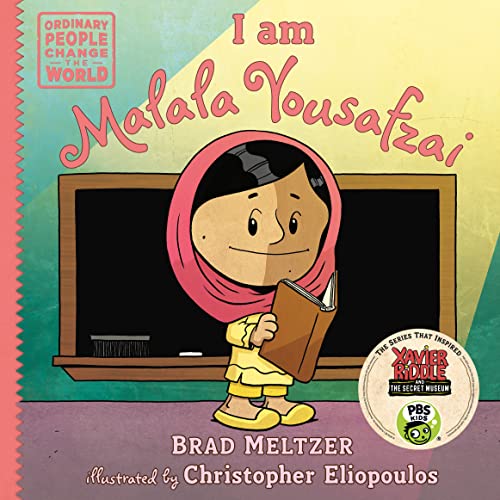 “by the time I was fourteen, the Taliban threatened to hurt me if I kept speaking out.”

Malala Yousafszai was born a Muslim in Pakistan in 1997. Though she described her culture as one where girls are “expected to get married and walk . . . behind your husband to show he’s in charge,” Malala always questioned traditions.

While education for girls wasn’t considered high priority, Malala learned, and as she got older the Taliban began to threaten her father, who established a school for girls. She had a thirst for knowledge and made headlines speaking to press from around the world.

“. . . by the time I was fourteen, the Taliban threatened to hurt me if I kept speaking out.” While riding on a school bus full of girls, a visibly nervous member of the Taliban boarded her bus, and as Malala was the only girl whose face was not fully covered, she was targeted and shot in the face.

Though in terrible pain, she survived and was encouraged with letters and gifts from youngsters around the world. At 16 she spoke about equality before the United Nations, met President Obama in 2013, and, in 2014 she became the youngest person to win the Nobel Peace Prize.

In this important, vital series recommended for children aged five to nine, Brad Meltzer provides a wonderful overview of the life of this humanitarian, young Malala Yousafzai, warts and all.

A thorough timeline of her life toward the end of the book, including authorized photos, outline newsworthy events kids can relate to. Malala has always loved learning and saw, early on, the inequities that girls and women suffered in her land.

Colorful, lovely drawings by Christopher Eliopoulos portray an essential biography for all young people to read or be read to. The “Ordinary People Change the World” series is a welcome, intelligent collection of books by the team of Meltzer and Eliopoulos. Others included in this series are stories of Muhammad Ali, Frida Kahlo, Oprah Winfrey, Walt Disney, Sonia Sotomayor, among many noteworthy characters who have changed world history in crucial, impressive ways, to serve as new heroes for today’s youth.