I Am a Capybara 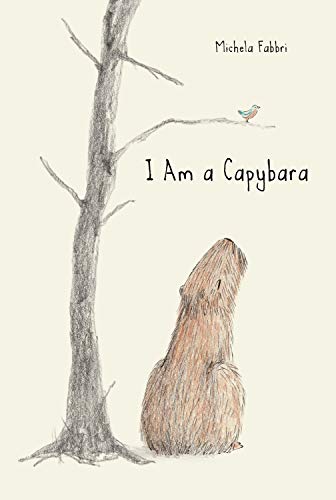 “Everything is groovy by virtue of being me.”

Capybaras are the largest rodents in the world. Not often the largest subject of children’s book literature, but here the capybara makes what is sure to be its picture book debut. The star of this fictional story chronicles what things are probably like in the life of a cordial capybara.

An easy-going persona wrapped up in a gender-neutral grammar, Capybara is introduced according to what it is not: not a mouse, not a beaver, nor a bear (which incidentally is not a rodent, so it’s choice as an example is a little off kilter—maybe porcupine or rabbit would be more in line).

Anyway, in this introduction the reader realizes this is not quite an educational, scientific discovery about the zoological behavioral studies of the capybara species, but rather a projection of an I’m okay, you’re okay message. As the pages turn, the reader gets deeper and deeper into this projection of what a capybara must be thinking, feeling, and preferring.

Capybara loves living simply. It loves to observe things; it loves poetry; it loves sharing, playing, exploring, strolling, resting, looking around. Capybara likes to see itself in others. While it is a calm soul, it also likes to see the fluttering of a little bird and recognizes the essence of the nature of the bird, so to speak. Calm, Capybara concludes, can be best friends with fluttery.

What else does capybara like? Lots of things. Swimming—capybaras are excellent swimmers. Lazing about—Capybara is very poetic about feeling lazy. Dressing up—Capybara remembers the time it wore a whale costume, and the time it wore a bow-tie to the opera and learned to like something it didn’t think it would ever like at all. Eating—there’s nothing quite like a warm bowl of broth. Secrets—Did you know that tough guys can like snuggling, too? Capybaras love to snuggle.

On the surface I am a Capybara is a cute, warm, fuzzy book with a novel character. The illustrations are done in in soft and simple pen and colored pencil minimalist design and give a very pleasant, peaceful tone to the pages. Fabbri did, after all, win accolades for her illustrations at a prominent children’s book festival in 2018. This is her first book published in the aftermath of that honor.

Yet there is something a little unsettling going on in the undercurrent of the story. The relentless emotional personification feels pushy and overly dramatic and that dynamic is all there is to the narrative. No story arc, no conflict, no character growth. Capybara hasn’t really done anything besides wax philosophical with existential well-being. Everything is groovy by virtue of being Capybara. Perhaps the reader can extrapolate: Everything is groovy by virtue of being me.