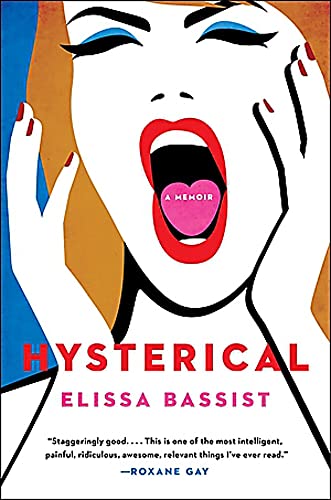 “Part memoir, part cultural critique, part manifesto, Hysterical is a tour de force, a powerful response and critique of the subjugation of girls and women across all aspects of our culture . . .”

In Hysterical, Elissa Bassist's experience of undiagnosed chronic pain becomes the occasion for a full-on summation of a larger phenomenon: the silencing of women's voices, historically and today, and the damage that causes. Part memoir, part cultural critique, part manifesto, Hysterical is a tour de force, a powerful response and critique of the subjugation of girls and women across all aspects of our culture—healthcare, workplaces, dating and sex (heterosexual, that is), pop culture (publishing, television, film), and of language itself. "Patriarchy," she writes, "is our mother tongue and preexisting condition."

Bassist begins with her story of undiagnosed pain, a personal study of frustration in the medical milieu. "I had what millions of American women had: pain that didn't make sense to doctors, a body that didn't make sense to science, a psyche that didn't make sense to mankind in general." One strength of this book is that Bassist backs up her claims with deep research, posted as footnotes or quoted within the text, such as this relevant fact from Maya Dusenbery's 2018 book, Doing Harm: The Truth about How Bad Medicine and Lazy Science Leave Women Dismissed, Misdiagnosed, and Sick: "Approximately 70 percent of [patients with medically unexplained symptoms] are women." And this, from Alyson J. McGregor's Sex Matters: How Male-Centric Medicine Endangers Women's Health and What We Can Do About It: "If you are a woman, you are at greater risk of misdiagnosis, improper treatment, and complications in common medical situations."

Bassist's inclusion of research tied to her personal experience and commentary makes for an engaging narrative, but it is also a savvy rhetorical move; the research bolsters her credibility, which she might not automatically earn because, as many women know, and as Bassist amply proves throughout the book, the conventional world doesn't listen to women or confer credibility, respect, and credit to their statements as it does men. "All of these statistics come out of a culture where men speak and women shut up," Bassist writes.

Bassist is particularly adept at disarticulating the mechanics of how ubiquitous misogynist messages in culture filter into girls' and women's psyches over time, after which, having internalized the messages, women can become their own detractors; they silence themselves. The process is insidious, its seepage into women's psyches a long steady drip until they are inured to maltreatment, accepting it as the norm if they want to survive in the institutions of our culture. For girls and women, "being socialized," Bassist writes, "is almost like being gaslit into mental illness." America, Bassist reminds us, "has a history of prescribing pills to traumatized, anxious, depressed, 'too emotional' and loud-mouthed women."

Bassist recounts her story of being outspoken as a young woman out of college, standing up for women and equal rights, but by early middle age, after having been beaten down for speaking out, the "silencing" becomes literal: she stops speaking. "I had learned, as every girl learns, to risk nothing and to prioritize fear—of vulnerability, of criticism, of ridicule, of rejection, of suffering, of violence—over authentic expression." Her fear of speaking as an adult, she writes, "could be understood as a personal dysfunction, or it could be understood as a generalized response to women being censured for speaking, such that a woman's fear system perceives any and every act as a fight waiting to happen and to prevent." Silence, she writes, "is a trauma response."

Much of what Bassist writes about are reminders of what women know intellectually, or intrinsically, from negotiating contemporary culture, but about which many may need reminding so as not to grow complacent. Because Hysterical amalgamates the evidence of how women's voices are silenced, the book is a potent concentrate. It can make for a bitter elixir, mainly because it's frustrating that nearly a half-century after 1970s second-wave feminism, girls and women face many of the same challenges, the same silencing.

For example, once again men (and many women, Amy Coney Barrett for one) are legislating to control women's bodies. The end of Roe v. Wade has resulted in a near-total ban on abortion, or severe limitations on reproductive choices, for 36% of American women of childbearing age, according to the New York Times. In this cultural context, Bassist's book could not be more timely and more important.

Thankfully, Bassist brings to this mix of memoir and research her humorous voice—often screamingly funny—that will help readers contend with the disheartening information on women's continued inequality.

At the end of the book, Bassist makes the connection between being silenced—withholding anger and unprocessed trauma—to physical pain. She quotes Soraya Chemaly, author of Rage Becomes Her: The Power of Women's Anger: "Women who repress their anger are twice as likely to die from heart-related disease," and "certain cancers, particularly breast cancer, and particularly in Black women, have been linked to what researchers describe as 'extreme suppression of anger.'" The equation works in the inverse, according to Chemaly: "[T]he survival rate for women with breast cancer who expressed their anger was twice that of women who kept their anger to themselves."

Writing this book, expressing herself—a giant middle-finger to patriarchy—is part of the cure for Bassist's physical and psychological pain. In this powerful, beautifully written, and utterly important book, Bassist's voice rings clear and true, especially her final line: "It wasn't ever my voice that would obliterate me. It was my silence."

Maureen Stanton's most recent book is Body Leaping Backward: Memoir of a Delinquent Girlhood, winner of the Maine Literary Award for memoir. She teaches creative writing at the University of Massachusetts Lowell.