Hymns of the Republic: The Story of the Final Year of the American Civil War 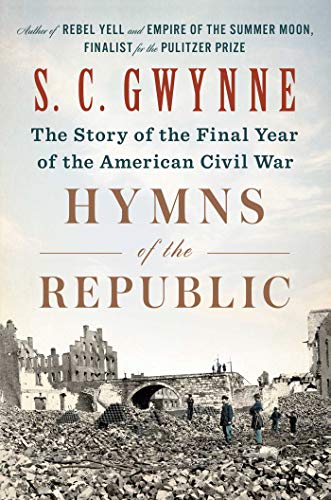 “S. C. Gwynne’s narrative of the events and personalities of the war’s last year is comparable to Jay Winik’s brilliant April 1865: The Month That Saved America, and even rivals the vivid description of these events by Shelby Foote, whose three-volume masterpiece remains the standard against which all Civil War books should be judged.”

By May 1864, the most well known battles of the American Civil War—Shiloh, Antietam, Fredericksburg, Chancellorsville, Gettysburg, and Vicksburg—had already been fought, but no end to the fighting was in sight. The outcome of the Civil War, S. G. Gwynne notes in Hymns of the Republic, likely hinged on the presidential election in November. And the outcome of that election, in turn, would largely be determined by what happened on the war’s battlefields.

Few observers at the time believed that President Abraham Lincoln would be reelected. Three years of mass bloodshed without decisive results turned many northerners against the war. Most Union soldiers were fighting to preserve the Union, not to end slavery. The Confederacy need only avoid losing the war to emerge victorious.

The war up to that point, especially in the crucial eastern theater, had consisted of armies periodically fighting large-scale battles, with the loser licking its wounds to fight another day. And all too often the loser was the Army of the Potomac. Even when Union forces defeated General Robert E. Lee’s outnumbered Army of Northern Virginia, such as at Antietam and Gettysburg, the victories were not exploited; Confederate forces were allowed to retreat, regroup, and rearm to fight the next battle.

But by May of 1864, something had changed. Union General Ulysses S. Grant, the victor at Shiloh, Ft. Henry, Ft. Donelson, and Vicksburg in the western theater of the war, had come east to destroy the Army of Northern Virginia and force the Confederacy to surrender. “In Grant’s attempt to do that,” writes Gwynne, “he would unleash, in just a few months, a storm of blood and death that beggared even the killing fields of Gettysburg and Chancellorsville.”

Grant and Lee, Gwynne writes, “would soon remake the war into something that neither the country nor its hardened veterans had ever before seen.”

Gwynne, a former award-winning correspondent, editor, and bureau chief at Time and the author of the widely acclaimed book Empire of the Summer Moon, incisively examines the final year of the Civil War and the crucial role Grant and his chief lieutenants played in ending the war.

Gwynne provides a brief but telling biographical sketch of Grant, noting his resilience in the face of repeated failures in civilian life. “What stands out in [Grant’s] life,” the author writes, “are less the defeats than his ability to endure them, less his perpetually declining prospects than his refusal to allow his losses to become shattering moral defeats.”

Grant didn’t quit. At Shiloh after suffering a stunning defeat on the first day of battle, Grant turned the tide and swept the rebels from the field on the battle’s second day. At Vicksburg, his persistence led to Union control of the Mississippi. Early in the war, he suffered the slings and arrows of critics in Washington, but understood that the only person he had to please was President Lincoln.

Grant also demonstrated a knack for selecting talented subordinates, like Generals William Sherman and Philip Sheridan, to implement his military plans. Those two generals played key roles in destroying the Confederacy’s ability and will to fight on.

In May 1864, time was not on the Union’s side. The election was merely seven months away, and unless Union armies produced victories that foreshadowed the war’s end, Lincoln’s chances of reelection would be slim.

The Overland Campaign waged by Grant in the spring and summer of 1864 changed the nature of the war. At the Wilderness, Spotsylvania Courthouse, the North Anna River, Cold Harbor, the crossing of the James River and on to Petersburg, the bloody war of attrition wore down Lee’s army. It was costly. The bodies piled up on both sides. Grant was called a “butcher.” But Grant persisted.

Meanwhile, Sherman moved steadily and relentlessly toward Atlanta, Sheridan laid waste to the Shenandoah Valley, and the Union naval blockade tightened its grip on the Confederacy’s coasts. Grant, writes Gwynne, “guided the war as it unfolded across a wide front.” He was “seeing the war as a single, unified theater, in which everything from Arkansas to Washington was interlinked and troop movements were a zero-sum game.”

This was total war. Grant ended prisoner exchanges because they favored the outnumbered Confederates. Sherman and Sheridan engaged in campaigns of destruction aimed at depriving the Confederacy of the means of war and bringing the war home to Southern civilians.

Grant’s relentless pressure on the Confederacy continued. While Atlanta burned, Sherman began his famous march to the sea. His troops lived off the land and marched in two huge wings 30 miles apart. “No one knew where he was going,” writes Gwynne. His soldiers “cut a wide swath of ruin.” Entire towns were burned. Slaves were liberated. He reached Savannah then marched north to Columbia, South Carolina, the cradle of the rebellion. Much of Columbia burned, though Gwynne points out that Sherman’s army was only partly to blame.

In the western theater, Union forces under General George H. Thomas destroyed most of what was left of the Confederate army in Tennessee at Nashville in December 1864. In January 1865, Union troops won the Battle of Fort Fisher in North Carolina, which deprived the Confederacy of its last major port.

Grant continued the siege at Petersburg. An increasingly desperate Confederate leadership decided to enable slaves to win their freedom by fighting for the Confederacy. “[A] moral threshold had been crossed,” Gwynne writes. “Slavery as an institution was as good as gone.”

African Americans fought in much larger numbers for the Union Army. Gwynne notes that they were not treated as equals—white soldiers were paid more, while black troops were frequently relegated to slave-like duties. And when black Union troops did fight, they often fell victim to rebel atrocities.

When Petersburg finally fell, Richmond’s fate was sealed. All that remained was for Southern leaders to realize the futility of continuing the war. Grant’s army chased Lee from Petersburg to Appomattox Courthouse, where the formal surrender of Lee’s army took place at the McLean House on April 9, 1865.

S. C. Gwynne’s narrative of the events and personalities of the war’s last year is comparable to Jay Winik’s brilliant April 1865: The Month That Saved America, and even rivals the vivid description of these events by Shelby Foote, whose three-volume masterpiece remains the standard against which all Civil War books should be judged.