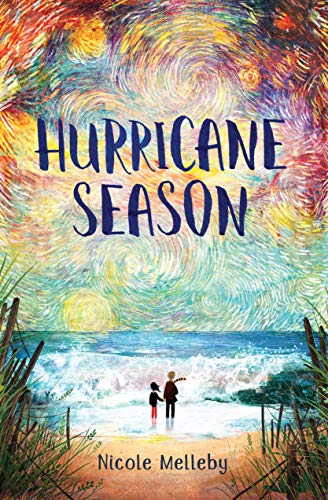 “Melleby’s beautifully written and moving debut depicts a well-crafted character in search of safety and understanding. An important and expertly layered novel.”

Eleven-year-old Fig lives with her father, a former concert pianist, who, due to his mental illness, has difficulties taking care of her. After her father shows up at school in one of his manic phases the teacher calls social services. They give them three months to sort things out.

Now worried that children’s services might pull them apart, Fig watches her dad walk off during a hurricane, which forces her to seek help from their neighbor, Mark.

It is hard for Fig to understand her father’s behavior, and his manic phases frighten her. Yet the love between Fig and her father is palpable throughout the novel.

When neighbor Mark brings the father back inside after a dangerous outing during a hurricane, Fig tucks her dad into bed and “as she moved away [he] mumbled a quiet, ‘Love you, darling.’

She blinked back her tears. ‘Double it.’ This was a soft challenge in the quiet room. . . . Fig’s hand was on the doorknob when she heard it. ‘Love you, love you.’”

Mark develops a close relationship with her dad, causing Fig to feel left out and angry, and she resists including a third person into their complicated life.

“She had started to trust Mark, and she always trusted her dad, but neither of them seem to trust her with much of anything. When had that changed? When had Mark figured out the pieces of her dad that she was never able to do?”

At school, as she works on a project about Vincent Van Gogh, she sees similarities between her father’s bipolar condition and the artist’s, which helps her to better understand her father’s often erratic behavior. Chapters are named after Van Gogh’s paintings and quotes from the artist introduce the different parts of the book. Fig develops a deep appreciation for Van Gogh’s art which may encourage young readers to look closer at art and those who create it.

When Fig gets a chance to see the original Starry Night painting she is deeply touched and also makes a connection between what she had read about the artist’s asylum stay and what is expressed on canvas.

“She had to stop herself from reaching out to touch it, from running her fingers over those strokes, following the movements with her eyes instead. Her mind went to what she had read about Van Gogh. He’d been sitting in a mental hospital in Saint-Remy, the bandage around his head covering his damaged ear, as he saw something only an artist could see and put it to paper for fig to marvel at now . . .”

In art class, she meets a boy who develops a crush on her. But Fig finds herself drawn instead to a high school girl in the library. When she realizes that the relationship between Mark and her father is more than just friendship it is not easy for Fig to accept this new reality and she insists on remaining the only and closest caretaker of her dad.

While facing many challenges and trying to keep their family together, Fig has to work through intense emotions that middle grade readers will relate to. The realistic ending provides hope for those who live with a loved one with mental illness.