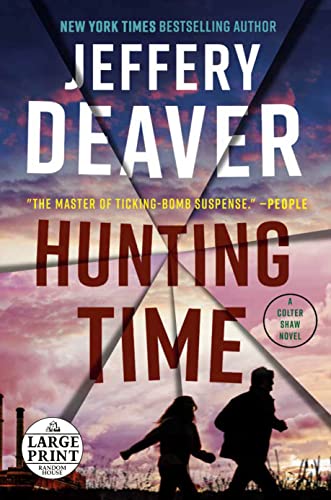 “Diversions like this add the layers of human interest that make a Jeffery Deaver novel so much more than a page-turner. The final twists of Hunting Time turn it into a masterful adventure.”

Cracking open a new mystery from Jeffery Deaver means relaxing into the hands of a master thriller author—relaxing, that is, until the tension of the chase ramps up. Hunting Time is a compelling thriller, with astonishing twists, landing the “reward seeker” and combat-skilled security consultant Colter Shaw in a cascade of demanding adventures.

Start with a trap that Shaw triggers, “accidentally on purpose.” Add a Russian espionage agent looking for the same stolen invention theft that Shaw’s been hired to foil. Complicate it more with a couple of quick switchbacks in who’s really doing what to whom.

Meanwhile, there are two alternating points of view: that of star inventor Allison Parker, who’s under threat from an ex-husband, and that of the ex-husband as he emerges early from prison and heads immediately for Allison’s place. When she takes immediate escape action with her teen daughter, Shaw receives an added assignment: Catch up with Allison and protect her and the teen.

Deaver, of course, jacks up the action (and chases!) in Hunting Time when more hunters add themselves to the race, some looking for Allison, some for her ex. And some, of course, for the technology.

But there’s still time for this expert author to spill insight into Colter Shaw, in this fourth in the suspenseful series: for example, the rule Shaw learned from his father: Never break the law. But of course, there are laws and laws, “and occasionally survival required you to redefine the concept of legal prohibitions.” So, for instance, if Allison Parker’s house door isn’t locked, why shouldn’t he open it? On the other hand, he’s not going to make himself a target of Parker’s ex, is he?

What none of these three know is that the most deadly hunters of all haven’t been identified yet. Deaver gives enough clues for an alert observer to guess at some other players, which constitutes “playing fair with the reader,” but the best and most surprising twists in Hunting Time come with almost no warning. Could her parents have guessed the teenager was so much smarter than she seems? Well, Deaver plays fair on that one, too. Her mother Allison, for all her brilliance, is still working out what her daughter Hannah means with a sleepy reply of “Love you too”:

“For the next fifteen minutes, until sleep unspooled within her, she tried to analyze the meaning—not of the words themselves . . . but of the tone in which her daughter had spoken them: sincere, a space filler, an obligation, an attempt to keep an enemy at bay, sardonic? Allison Parker, the engineer mother, approached this question as if she were facing a mathematical problem that was aggressively difficult, involving limits and sine waves and integrals and differentials and sequences and variables. . . . But her analytical skills failed her, and the only conclusion she could draw was that the calculus of the heart was both infinitely complex and absurdly simple and, therefore, wholly insoluble.”

Diversions like this add the layers of human interest that make a Jeffery Deaver novel so much more than a page-turner. The final twists of Hunting Time turn it into a masterful adventure that will repay both quick reading and relaxed (at least, as much as the pace allows) re-exploration of the clues, red herrings, and insights so precisely laid out, and the trail that Colter Shaw must both follow and comprehend.