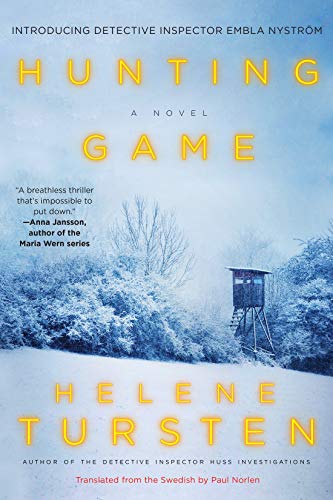 “Hunting Game is variously a dark, brooding Swedish noir crime novel, a titillating romance, and an outdoorsman-type hunting adventure. It takes a shot at each target, but unfortunately misses them all.”

Swedish police detective Embla Nystrom is taking a vacation from her high-stress job with the Vastra Goteland County Bureau of Investigation’s Mobile Unit to participate in an annual moose hunt with family and friends.

There are two parties of hunters in the area, Embla’s and another comprised of upper-class landowners who stay in a cabin known as the Hunting Castle. The two parties collaborate on the use of trails, stands, and various facilities, following a hunting plan that includes quotas and protocols for each day’s activities.

The plan begins to go awry when a dangerous snake bites a female hunter in an outhouse that is fully insulated. A fox is caught in a leg-hold trap on the path Embla normally walks. Is their mysterious new participant, Peter, somehow involved?

When one of the hunters is found dead at the bottom of a cliff and the owner of the Hunting Castle goes missing, Embla finds herself in the middle of a long-standing plan of revenge that threatens to destroy them all.

Hunting Game begins slowly and never really picks up the pace. Tursten spends a great deal of time establishing the atmosphere of the hunting camp and surrounding terrain, including what the parties eat for meals and where they relieve themselves when necessary (the aforementioned outhouse, or off the edge of the cliff). The snake and fox incidents, along with a clichéd mysterious room in Peter’s house, are intended to build suspense and support the notion that someone named M is stalking members of the hunting parties and that Peter may be involved.

Meanwhile, the carnage is underway. Readers who are at all sensitive about animals are advised to give this book a pass. Anything that moves is caught up in the slaughter, including moose cows and calves, a rather stunning bull moose that Embla proudly shoots, various deer (a break from the main action), the snake, the fox, whose pitiful suffering is described in unfortunate detail before it’s dispatched, and, in case that isn’t enough, a pet dog Embla recalls having shot while on the job after it ate its dead master’s face.

Tursten’s universe is decidedly red in tooth and claw.

Halfway through the story, when the abovementioned body finally turns up to provide a concrete focus for the mystery, local law enforcement has an oddly ambivalent reaction. When Embla calls it in, the on-duty superintendent in Trollhättan doesn’t think investigators are needed. An accidental fall, no doubt? His arm has to be twisted before he’ll send someone for a look. Surely to goodness unexplained death investigation in Sweden isn’t actually handled this loosely, is it?

Embla is unfortunately not the memorable, engaging protagonist Tursten wishes her to be. She’s flat and derivative, and if she’s a top-notch criminal investigator, we certainly don’t get a strong sense of that here.

Her unfortunate decision to fall into an intimate relationship with Peter, the primary suspect, is a head-shaker. Tursten’s obviously angling toward readers who enjoy a combination of romance and mystery, but the whole thing comes off as disappointing and distasteful, and what we end up getting is an Embla who’s a fluttery, easily wooed pushover with a bit of a temper. Not the sort of protagonist who will inspire us to get out there right away to look for the next installment in the series.

Indeed, Tursten tries to mix so many different flavors into her novel that it simply presents itself as undercooked and unappealing. Hunting Game is variously a dark, brooding Swedish noir crime novel, a titillating romance, and an outdoorsman-type hunting adventure. It takes a shot at each target, but unfortunately misses them all.