Hunter's Moon: A Novel in Stories 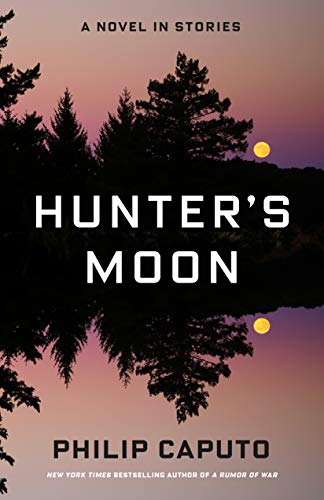 “The seven stories in Hunter’s Moon feature a recurring cast of men and women, and in each tale a new aspect of their character is revealed. Caputo has woven a multicolored tapestry where wounds are opened and healing is scarce.”

“I am not suited for forgetfulness,” says one of the characters in Gary’s The Kites. As are none of the characters in Caputo’s stories that take place in Michigan’s Upper Peninsula. As portrayed in vivid you-are-there descriptions, it is an untamed land: “Looking down from the hardwood ridge, Will sees that there are three ponds: peninsulas of hard ground, choked with tag alders, spread between the ponds like long green fingers. . . . He thrashes forward and climbs a gentle rise into a spruce  and birch woods, relieved to be out of the alder jungle.”

The characters are not unlike those portrayed by Shepherd in Buried Child and True West. They are largely plagued by disappointment, disillusion, and a breakdown of traditional values. To this mix, Caputo adds men’s flashbacks of wars in Vietnam and Iraq. The description of two incidents in these wars are more stomach churning and graphic as any photo could be. The veterans’ attitude toward war is spoken through Will in “Lost.” Hearing “Thank you for your service,” he thinks, “Whenever I can fight in a pointless war for you, let me know.”

“Y’know, I’m not sure you ever appreciated your mother the way you should.”

“A newscaster reading the obituary of somebody he didn’t know. You’ve told me that. More than once.”

In “Lost,” Will claws at his friend Skryd, “Know something? Doesn’t surprise me you got canned from your job and your wife took a hike. This is a good place for you, out her all by yourself in the middle of the woods. A good place for a fucking loser.”

Caputo has an attentive ear for the way people talk. Notice the way he punctuates his dialogue. The placement of commas, periods, and question marks break up the talk and serve to emphasize the speaker’s words. Effective and realistic.

Though most of the stories are about relationships among men, “The Guest” features Lisa. She runs a B&B in the small town of Vieux Desert. During the fall, hunters drop in; one, Gaetan, becomes a regular—at the B&B and in Lisa’s bed. And the affair goes on for 11 years, for a week each year. But, as will happen, Gaetan’s wife discovers the affair and leaves him. He runs to Lisa to tell her what has happened, and that he is in love with her. In a twist to the usual trope, she tells him that for her is was the passion, the sex, attempting to make her explanation sound simultaneously, “tender and ruthless.”

The seven stories in Hunter’s Moon feature a recurring cast of men and women, and in each tale a new aspect of their character is revealed. Caputo has woven a multicolored tapestry where wounds are opened and healing is scarce.