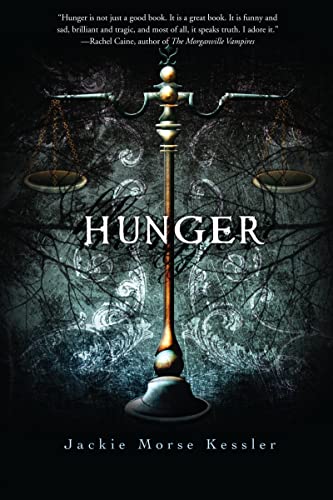 Perhaps one can decipher what this book is about from its title: Hunger. Indeed it does touch on that—the experience of hunger on a personal level, but it also takes the reader on an exploration of hunger on a wider scale—in an interesting and very original way. Let me explain.

When you’re anorexic, you’re hungry—very. And at its core, that is what this book is about, but it is so much more. Seventeen-year-old Lisabeth Lewis is anorexic. Each day she struggles to hide her eating disorder and fake out her family and friends that nothing is wrong, even as the evidence is clear: she continues to disappear, almost literally, as she thins out. She’s acting very weird around food and everyone is afraid of what is happening to her.

They reach out, hoping she’ll respond to their concern, their offers of help, but Lisabeth is only interested in listening to one voice: the Thin voice. It’s a constant reminder of what she’s eating, what she shouldn’t be eating, and how much work she’s going to have to do to burn of those “excess” calories. That is until she meets Death . . . and War, and let’s not forget Pestilence. You see, Lisabeth becomes Famine, one of the Four Horseman of the Apocalypse—literally.

Since she’s starving herself and contemplating suicide, Death (quite a sexy version, I might add) decides to make use of her natural inclinations and put her to good use. Combining Lisabeth’s most salient features: hunger, starvation, and ultimately death, being appointed Famine is an ideal job for her—whether she likes it or not.

Jackie Morse Kessler does a fine job of taking a critical issue that has been explored in writing no small number of times, and putting a new and thought provoking spin on it. It was sheer genius to combine the eating disorder anorexia with the ultimate entity signifying lack of food, nourishment and all that that entails: famine.

Now the story transforms and encompasses not only a pertinent issue, but there’s a supernatural spin on the tale that does not detract from it, but in fact adds to it. It nudges the reader to see hunger on a bigger playing field, to compare and contrast hunger on the personal, micro level via an eating disorder, versus hunger on the macro level—people who are starving in famine drenched countries.

I wish Hunger were longer. It is only 180 pages, and it would have been nice to see the Horseman characters explored in greater depth.

Happily, Ms. Kessler is not done with the Four Horseman of the Apocalypse quite yet. She will be exploring self-mutilation as her next protagonist, Missy, becomes War in her next novel entitled Rage due to release in April 2011. I await it with much anticipation.