Humblebrag: The Art of False Modesty 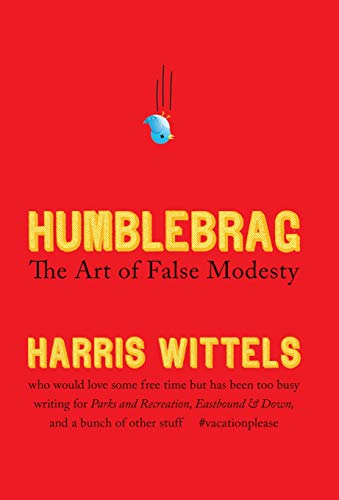 Humblebrag is an Eddie Haskell of a thing: at once bumptious and snide and kind of majorly twee, ponderous in its attempts to manipulate, painfully obvious in its ill-disguised deep seated anger, and yet not altogether lacking in its capacity, from time to time, to evoke sudden laughter of the explosive sort that registers as a snort issued from the nose.

The book, you see, is all about the concept of “humblebrag,” a word conjured up by our author, TV writer, and Twitter savant Harris Wittels, who defines his term right up front:

“Man, I can’t believe this dumb little word I came up with actually got me a book deal.

“Did that last sentence annoy you? It should have. But, can you not quite put your finger on why it annoyed you? Well, it’s because that type of statement is what I like to call a ‘humblebrag’ and it’s what this book is all about. First, let’s define a humblebrag.

“humblebrag (huhm-buhl’brag)
noun
1. a specific type of brag that masks the boasting part of a statement in a faux-humble guise. The false humility allows the offender to boast about their ‘achievements’ without any sense of shame or guilt. Humblebrags are usually self-deprecating in nature, but there are a few exceptions, which are mentioned later in the book.”

Digesting this, the reader has a question right up front: Is referencing one’s own book written on the subject of faux humility and bragging within the context of a supposed definition of a newly-coined term (“there are a few exceptions, which are mentioned later in the book”) a variant on the humblebrag itself?

There is no answer forthcoming.

But be forewarned: To read Humblebrag is to become aware of how deeply, how completely we are, every single day of our sad little lives, steeped in this verbal feint and thrust. How we have, thanks largely to the Internet (think: Twitter and Facebook), humblebragged ourselves into a corner.

On the subject of social media, the author and I apparently agree.

And on the subject of the point from which the contagion spread, he is quite clear:

“I didn’t really notice humblebrags until I moved to Los Angeles in 2006. I love living here, but, man—going to a party out here is a nonstop humblebrag-fest; people complaining about how their pilots probably won’t get picked up or how a studio gave their screenplay some shitty notes. It can be truly endless. It’s just kinda how people communicate out here. I am generalizing, of course. Not everyone in LA does that. Also, it isn’t just in LA that people are shamelessly self-promotional/aggrandizing. I am sure that, right now, somewhere in Brooklyn, a street artist is saying he put a picture of Mao Tse-tung on the highest Nike billboard, but it sucks that he got arrested. Or that in Ireland someone is saying he grew the biggest potato, but ‘Aye, was it hard work.’ It happens everywhere all the time, but I just noticed it in LA specifically. Yet, for a while, I couldn’t name exactly what I was noticing. I just knew it wasn’t straight-up bragging.

“Then Twitter blew up and I started constantly seeing these kind of statements typed out for the world to see. This was the perfect medium for ‘it’ and I finally identified what ‘it’ was and why it annoyed me. It was bragging, but it wasn’t just bragging. It was a type of bragging that included some amount of fake modesty, which somehow made it acceptable to do.”

From here, after the retread of “humblebrag, what it is and where it happens,” the book shifts gears. And the reader looks on in awe.

For the rest of the book—and a slim volume it is—consists only of examples of humblebrags. In other words, reprints of Tweets posted by twits, and the snarky response the author has to offer for each. (The fact that these Tweets and their responses apparently first saw the digital light of day on the Humblebrags website, only make the morphing of them into this book somehow more awesome.)

Thus it is a standup act in print. With the tweeted set-up and the author-provided punch line.

“Shaun Phillips (@ShaunPhillips95)
“A woman told me i was poetry in motion. I’m not sure how to take that.”

“What’s important to remember about this tweet (aka the worst thing that has ever happened on earth) is that she also named herself ‘gorgeous Shanit.’ Also, regarding the copious usage of exclamation marks: someone may want to go check on her; evidence shows she may have died mid-tweet and her head fell onto the keyboard.”

“Kamilah Anwar (@KamilahAnwar)
“This group of bum looking guys just tried hitting on me in front of all my co-workers. Hilarious & embarrassing at the same time

“Well, it’s happened: the most hateable thought that has ever been conveyed by man. From her profile picture Kamilah looks to be some sort of model-type person I guess, or at the very least, she appears to be standing how a model stands. ‘This group of bum-looking buys” makes this the worst/funniest right off the bat. And the she goes on to be embarrassed at the mere idea of someone who looks like a homeless person giving her attention. It’s like, ‘Yeah, right, homeless guy! I’m fucking Kamilah Anwar and you don’t have a fucking home! Keep it moving, pal!’

Notice: unlike Kamilah Anwar and the others, the author is not limited to 140 characters. Sometimes he goes on an on.

And sometimes, his commentary is short and sweet:

“Chris Brogan (@chrisbrogan)
“On the phone with my editor, book publicist and marketing person. Man, books take work. Mainstream ones.”

Sometimes the humblebraggarts are famous:

“Some people have to wake up at five to clean urinals.”

More often, they merely yearn to be famous:

“Christopher Hayes (@chrishayes)
“Really looking forward to ‘watching’ rather than ‘hosting’ @maddow tonight. The former was a million times easier. (at least)”

Mr. Wittels punches up his text as best he can, notably by grouping his jokes into categorized chapters (“Ugh, People Keep Hitting on Me!” “Ugh, I Hate Having All This Money!” “Ugh, Being an Author Is Hard!”), saving the best for last.

Calling it the “Superbowl of humblebrag,” Mr. Wittels concludes by dissecting the thank you speeches that Academy Award winners give. Including this, from a Best Actress winner:

“Hillary Swank, Best Actress, Million Dollar Baby, February 27, 2005
“I don’t know what I did in this life to deserve all this. I’m just a girl from a trailer park who had a dream. I never thought this would ever happen, let alone be nominated. And a working actor, for that matter. And now, this.”

About which our author comments: “There’s roughly four humblebrags in this one paragraph, and this is only part of her speech.”

And then there’s George Clooney. Perhaps the most famous man in the world. A man who finally found himself on stage, accepting the award for Best Actor:

“George Clooney, Best Actor, Syriana, March 5, 2006:
“Wow. Wow. All right, so I’m not winning Director. It’s a funny thing about winning an Academy Award, this will always be sort of synonymous with your name from here on in. If will be: Oscar winner George Clooney, Sexiest Man Alive 1997, Batman, died today in a freak accident . . .

“Listen, I don’t quite know how you compare art. You look at these performances this year, of these actors, and unless we all did the same role—everyone put on a bat suit, we’ll all try that—unless we all did the same role, I don’t know how you compare it. They are stellar performances and wonderful work, and I’m honored, truly honored to be up here.”

Which receives this lengthy author’s commentary:

“Clooney employs some masterful humblebragging here. He references his turn as Batman in one of the worst movies every made, multiple times in fact. Then he makes fun of the fact that he won Sexiest Man Alive nine years ago. Then he makes a grandiose postulation about not knowing how one ‘compares art.’

“Kids, take note. THIS is how you humblebrag.”

It could go on from here, wondering if this is a book at all really, or if taking posted publically musings, however lame, and bitching about them (Kamilah Anwar aside) even constitutes “writing.”

Or I could deign to admit that I read it all and laughed plenty.

But I better stop right here and leave it at that, because, OMG, I’VE got all these major publishing houses waiting for me to read their books and tell them whether they’re any good or not.