Huck Out West: A Novel 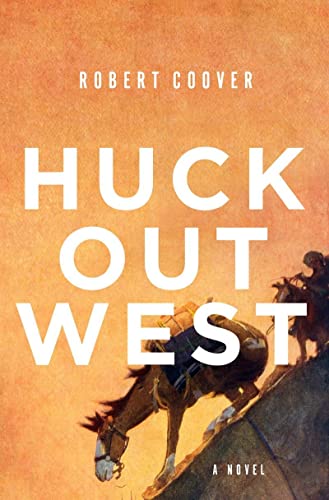 “Coover’s Huck Out West stands alongside Twain’s original as a worthy companion to that of the master storyteller of the 19th century.”

It takes some courage, or perhaps hutzpah, to take a piece of classic American literature by one of the great humorists and social observers and to produce a sequel written in the same style as the original. It takes great talent do so successfully. Robert Coover has all the qualities necessary and deploys them deftly in his latest novel, Huck Out West.

This is Coover’s 11th novel (by some counts his 14th). His first, The Origin of the Brunists, was published in 1966 and won the William Faulkner Award for notable first novel. In over a half century of writing Coover has also published five novellas, several plays, and a multitude of short stories.

Robert Coover’s range is remarkable. He has reimagined fairytales, produced novels in such genre as the western and the noir mystery, twice used Richard Nixon as a central character, rewritten historical events, savaged sacred cows of Americana, and taken his readers into some very dark places in the human drama. He has satirized religion, patriotism, politics, and more.

Coover has now turned his considerable talents to an extension of the Huck Finn story, taking Huck into some of the dark corners and well-known places in “sivilization” and across a swath of American western history in the second half of the 19th century.

At one point Huck crosses paths with Jim who had been separated from Huck and Tom when they sold Jim back into slavery. The brief reunification takes place within the western trek of the Mormons. Jim is overjoyed when he meets and greets “Huck Honey,” but they are separated shortly by another of Huck’s many crises.

Coover’s American west is peopled by a large variety of scoundrels, thieves, and sadists. It is a place of violence, death, and dismemberment with an occasional dose of human kindness amidst a torrent of greed. The gold rush in the Black Hills pollutes the environment as a variety of seekers pan the streams and overrun small quiet villages transforming them into booming cesspools of human depravity. Or as Huck and Coover might put it, the area is overrun by “sivilization.”

Huck’s closest companion through these adventures is Eeteh, a Lakota Indian. Both of them, as Huck says, are misfits who are having more than a bit of trouble with their respective tribes. This is their bond, and it proves quite strong as it is repeatedly tested by both tribes. Eeteh is a storyteller and tells Huck tales of Coyote, a mythic character common in Native American folklore. The stories fascinate Huck although he doesn’t always comprehend them.

It is no surprise that one of those who is out to suppress Huck and destroy the Lakota is an army colonel known to Huck as General Hard Ass, and to others as General Ringlets. He is not a general, but wanted to be called “general” by his men. The model for General Hard Ass is, of course, George Armstrong Custer, made clear by the inclusion of references to the Washita Massacre and the Little Big Horn.

Along the way, Huck reunites with Tom Sawyer, who had gone east and become a lawyer of considerable talent. Tom sharpened his manipulative skills and polished his surplus of charisma. Tom reenters Huck’s life in dramatic fashion shooting the rope being used to hang Huck just as the trap door opens. Huck drops to the ground, and his life is saved.

Huck always idolized Tom, but slowly their relationship becomes strained over Huck’s friendship with Eeteh, particularly when Tom expresses his views on Indians. Tom says that he has nothing against Indians and does not hate them, but “we’re building something grand out here, ocean to ocean, and they’re in the way. Some day, we’ll make statues of them, like they was our own heroes. First, though we got to kill them all.” Huck is both skeptical and uneasy, telling Tom, “All this killing, it’s too many for me.”

Many of the characters created by Mark Twain make their way in and out of Coover’s rendition of Huck’s adult life, but they are transformed with a distinctive Cooverian imprint. The result is not always on the mark, but the misses are few and far between. Coover’s Huck Out West stands alongside Twain’s original as a worthy companion to that of the master storyteller of the 19th century.

For those who enjoyed Mark Twain’s work, Coover’s story will not disappoint. For those who have followed Coover’s long and winding literary journey, this is another fine example of his talent and adds to his place in the American literary pantheon.

For others it’s just great fun.