Howl like a Wolf!: An Interactive Guide to Amazing Animal Behaviors 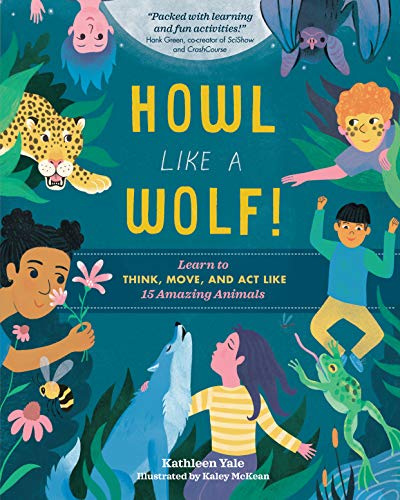 In Howl Like a Wolf! wildlife biologist Kathleen Yale introduces children to 15 animals by presenting a few key facts about each and then inviting the child to enter into the world of that creature through its interesting behaviors or unusual sense organs.

We're given the common and Latin names of each animal, but there's no helpful explanation of the scientific usage of Latin names. Unfamiliar words such as “adaptations” and “echolocation” are usually but not always highlighted in a different color and explained in the text.

Looking through the list of animals on the contents page gives rise to a sense of eager anticipation as to how we might behave like some of the more intriguing animals, such as the bee or octopus.

In the case of the octopus we're instructed to squeeze through a narrow space —much easier for the boneless octopus than for those of us with skeletons—and then try an experiment to show how ink released in water works to conceal the octopus from predators. In the case of the bee, we're asked to communicate through the waggle dance, pollinate flowers, and drink through a straw.

The frog invites us to pick up food using only our tongue, while the bat suggests an exercise in seeing with our ears. Other activities involve creating new body parts, like the rattlesnake's rattle or the elephant's trunk. The suggestion to duplicate skunk spray using scented water in a spray bottle might give rise to some parental concerns, and parents may wish to look over the suggested activities beforehand.

The delightful illustrations, executed by Kaley McKean in a variety of pleasing, harmonious colors, appear to be cut paper touched up with details such as fur or feathers. The illustration that accompanies the leopard's suggestion to carry your lunch up a tree, however, may give rise to some parental concerns as it shows a child holding a sandwich in one hand while perched precariously on climbing bars.

Setting these minor concerns aside, this book is a fantastic way for children to learn about the great variety of unusual animal behaviors and special adaptations and enter the unique sensory world of each creature. It will appeal especially to imaginative children aged six to nine who enjoy activities rather than memorizing facts.

As an added bonus, there's a page of animal masks at the end of the book that may be downloaded from the Storey Publishing website. They include all the animals covered in the book except for the whale and octopus. Creating masks for these animals was evidently too much of a challenge even for this wonderfully imaginative book!

Howl Like a Wolf! can provide children with hours of delightful play while at the same time conveying important life lessons. By fostering children's imaginations to enter the unique world of each animal in turn they will identify with and value the amazing adaptations and stunning biodiversity of life on this planet.

There's no better way to raise children to be environmentally responsible adults than by encouraging their natural love and appreciation of the animal kingdom in all its glorious diversity.