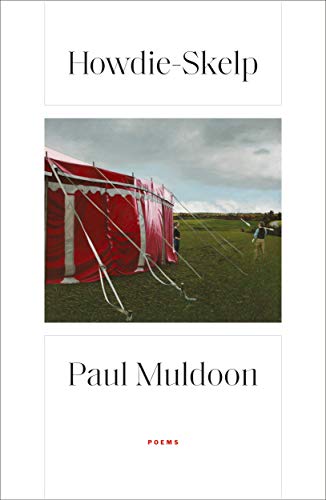 “the kind of poetry that can make a reader wince with delight.”

Like the poetic equivalent of Steven Millhauser’s brilliant short story “The Slap,” Paul Muldoon’s new collection creates a similar magical realist effect, with an amalgamation of down-to-earth narrative, surreal images, and elliptical connections. At times, the poet makes the reader feel as if the poems are marvelous word association games being played for high stakes. Muldoon’s poetry, like old age, is not for sissies. His work is filled with riddles and riddled with puns, a verse both suggestive and erudite and strange and dreamlike in its repetitions. He seems to delight in perplexing his readers in the way his countryman James Joyce did. “Get me or get off the page,” he seems to say.

With Howdie-Skelp, the 70-year-old Muldoon, 2003 Pulitzer Prize winner for Moy Sand and Gravel, shows no sign of slowing down or making things easy for the faint of heart.  For a decade the poetry editor at The New Yorker and now a professor at Princeton, he has been described by Roger Rosenblatt as “one of the greatest poets of the past hundred years . . . only Yeats before him could write with such measured fury.” Howdie-Skelp, his 14th collection of poems, offers the kind of slap that great poetry from the likes of William Butler Yeats or Seamus Heaney can produce, the kind of poetry that can make a reader wince with delight.

Born in County Armagh and raised in County Tyrone, Muldoon holds Northern Ireland as the locus of his poetic imagination. But Muldoon has lived in the United States long enough for America to become another focus for his wit, anger, and puzzlement. And those two countries take the force of his satire and love in a language that has the jeweled clarity of Yeats and the playful opaqueness of Joyce, lyrical and earthbound, alternately sliding from Gaelicisms and gobshites to learned allusions and postmodern puzzles. At times, the reader feels himself slipping down a rabbit hole that is similar to territory John Barth might have tunneled in Lost in the Funhouse, burrowing deep into repeated lines and unstated connections that challenge the reader to find a way through the dark.

Following Yeats’s example, Muldoon makes the personal political in many of the poems in this volume. “American Standard,” for instance, hints at the political toilet Americans have found themselves in for half a decade: “A porpoise snored upon the phosphorescent swell./Vis-à-vis Trump, we have only ourselves to blame for giving ourselves over to pablum./A triton rang the final warning bell.” Muldoon has some skewers left for a few other presidents: “Some presidents seem to say ‘hi.’/Some presidents seem to say ‘howdy.’/Some are in bed with a Soviet spy./Some are still in bed with the Saudis./Some of us are still trying to figure out why George W. Bush would bestow/the favor of stowing away on a plane to thirteen bin Ladens./We all know that if you spend time in the stew/your goose will be cooked like a goose in Baden-Badens.”

Some of his poems strike in the prosaic tone of a newspaper article and others with the arcane energy of a guy who is a lot smarter than you’ll ever be. Amid the fast and furious flying puns, the puzzling repetitions, and the baffling connections from one line to another, Muldoon finds a way of holding his reader with the seriousness of his frivolity, with the range of his knowledge and interests—everything from Davy Crockett and Zorro, the Swamp Fox and Jamal Khashoggi to a 23 section sequence of ekphrastic poetry that responds to great paintings from the Renaissance to the 21st century. “Damsons,” a poem consisting of 16 sections, brings the idea of the “skelp,” the slap, into prominence without ever uttering the word skelp. “Damsons” leans toward the villanelle and the litany—with allusions to Raymond Chandler and “clips round the ear” swimming in and out of the stream of the poem like a school of brightly colored fish.

Muldoon’s poetry encompasses a large world: the Troubles, Viking raids, the Ogham alphabet, Ezra Pound, Florence Nightingale, and cancer cells. His verse is a skelp, a clap, a clip on the ear. It surprises, it dramatizes that each act comes with consequences, and it demands acknowledgment. And it brings us into the present tense. The final poem in the volume, “Plaguey Hill,” circles like Joyce’s Finnegans Wake. Toward the end of the poem, Muldoon writes, “At present all/I can think of is the burial mound/once known as Plaguey Hill/that dominates Friar’s Bush graveyard in Belfast,” tying it to his home in New York City, where people “worked hand over fist/to set up field hospitals” in our own plague year.