Is This How You Eat a Watermelon? 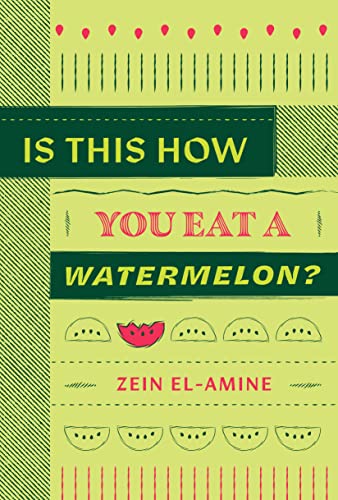 These seven short stories introduce a range of characters and situations, quick glimpses into different lives in Lebanon. There is no real link between the stories. They don’t resonate against each other, amplifying one’s sense of a whole greater than the parts. There is no movement from one story to the next, no sense of gaining a deeper view of a people or a place, just distinct narrative snippets.

Unfortunately none of the stories provide a satisfying arc of either character development or plot. Though each acts as a stand-alone piece, none of which have the resolution of a satisfying ending, even the most developed story about a young man wrongly imprisoned in Bahrain.

The man is freed, which is a happy ending, but it all feels arbitrary, without any real emotional arc, no real tension and no real relief. The arrest is explained by the man’s father once he’s back home:

“They told us there was an attempted coup on the day you arrived in Bahrain and that there were Saudi Arabia Shi’a involved. Those men happened to be on the same plane as you. They said you were involved in the coup and that they were starting to ‘disappear’ those involved.”

The matter-of-fact tone is the same throughout the story. In fact, that voice is echoed in all the stories. For all the chaos of Lebanon, those aspects appear on the edges of the stories. One story involves fighting between Palestinians and Phalangists, another Israeli soldiers in Southern Lebanon, still another tension between Shi’a and Sunni. A ghost story manages to feel neither eerie nor disturbing.

The only landscape that’s effectively evoked is that of the tobacco-growing south. There is nothing distinctive of a time or place other than allusions to dating and drinking not being allowed. Beirut is mentioned several times, but readers won’t feel as if they’re walking the streets there. They won’t see the buildings still damaged from the decades-long civil war that ended in 1990. Beirut as shown here could be anywhere.

The title story is an especially strange choice. The anecdote about the watermelon is meant to prove how the main character, Ghassan, is full of gusto, a zest for life, but it feels forced and flat:

“Take for example the watermelon incident. One day Ghassan was sitting playing checkers with his youngest daughter Huda, who was seven at the time. . . . Ghassan looked up and saw Huda nibbling along the top of this red semi-circle of a slice that dwarfed her face.

‘Is this how you eat watermelon?’ he asked. She looked at him puzzled and waited for clarification.

. . . Then he added, ‘Do you eat it like this?’ and imitated her nibbling. Huda looked back at her mother to seek help and caught her stifling a laugh. . . .

‘You eat it like this, like a goat,” and Ghassan went into typewriter mode, chomping wildly at the slice from one end to another, watermelon seeds flying left and right.”

The author may want to say we need to take big bites into our lives, but all of these stories feel like nibbles around the edges, never quite getting to the meat of the thing.