How We Change: (And Ten Reasons Why We Don't) 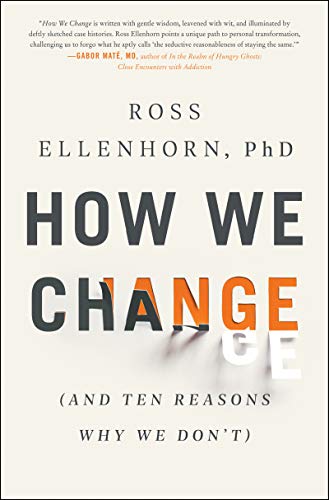 “although we glorify the benefits of transformation, most of us, to our detriment, have barely scraped the surface of what holds us back.”

There isn’t a person alive who doesn’t crave to learn the secrets of successfully changing behavior. Nor is there anyone who hasn’t tried to be different and failed miserably. How We Change provides a sound framework for examining our longings to become better people while contending with the barriers that prevent it from happening. With wisdom, compassion, humility, and humor, Ross Ellenhorn takes us inside the mind for a closeup view of this tug-of-war and the strategies for winning it.

Although written for the general public, Ellenhorn’s theoretical explanations often have the heft of a textbook. Because the process of change is far more complex than most of us think, we are not meant to breeze through passages, but to spend time reading and reflecting on them.

As a counterbalance, the book is enlivened by several engrossing case studies and Ellenhorn’s personal stories about his own successful and not so successful efforts to change (mostly involving tidying his disorganized office). His confessions prove that no one, not even an expert on the subject, is exempt from the strides forward and slides backward we all face on the road to change.

“Change,” says Ellenhorn, “is about tension—between where you are now and where you want to be.” The higher the stakes involved in our desire to change, the greater our fear and anxiety and the stronger the tension between now and “when.” He is out to teach us that although we glorify the benefits of transformation, most of us, to our detriment, have barely scraped the surface of what holds us back.

His explanation is easily understood through a force field analysis of (conscious and unconscious) driving and restraining factors. Drivers push us toward change, and restrainers keep us rooted in staying the same. Via exposition, charts, and examples, he shows readers why they must recognize, resolve, and use the tension between these two forces for successful change to occur.

One set of opposing forces is the freedom that comes from having many choices versus the controlling force of our ultimate accountability and aloneness: that you—and only you—are responsible for how your life gets lived. As we know, this awareness can be both exhilarating and terrifying.

The second pairing is hope countered by a fear of hope that arduous efforts might fail and end in disappointment. Believing that “hope keeps you going” produces confidence and faith that propel you forward, but it also puts you at greater risk for loss.

The third set of forces is faith versus helplessness. Faith means trusting ourselves and our abilities, which many people are unable to do as a result of real or imagined deficiencies, including past failures. Without faith, they sink into despair.

Ellenhorn posits that an overarching, universal force restraining change is our existential fear of death, a constant reminder of how we want to live our lives. “Personal change is always about how we exist within the shadow of the giant, completely unpredictable hourglass of our mortality. It’s never not about this.” Hanging over our heads is the weight of “need to” and “should” and doing the “right” thing, whether giving up smoking cigarettes, ending an affair, eating healthfully, or returning to graduate school. This fear of not getting life right shines a constant spotlight on all our decisions and, when we believe we’ve failed or might fail to achieve our goals, causes us to suffer tremendous remorse, regret, impatience, shame, and disappointment.

One major takeaway of this book is that we must understand at both a cognitive and emotional level that we have a multitude of very sensible reasons to avoid change. We can ignore, rationalize, devalue, deny, or minimize them, but we won’t overcome them—and make the changes we yearn for—unless and until we address and take them seriously.

Another theme in the book is that staying the same is far easier than changing. Ellenhorn presents ten darned good reasons not to change that involve protecting ourselves from: anxiety over aloneness, accountability, and pressure or lack of knowledge about what’s next; our own and others’ expectations of us; having to be patient and humble in taking small steps; surrendering our identity of suffering; and altering our relationship with ourselves and others.

Most of this book is about the internal forces that shape our ability to change. However, Ellenhorn pays due homage to external forces as well, such as our innate aptitudes, talents and strengths, social experiences, economic status, and the oppression or privilege of the political power structure under which we live. He points out that because these constraints are not under our control, we must be realistic when it comes to seeking change and pursuing transformation. He wisely reminds us that we are not failures because we do not make every change we set out to and warns us about celebrity oracles and so-called experts who insist that the reason we are not changing is because we lack courage or do not want something badly enough.

How to Change is far from a linear read. Instead, Ellenhorn explains ideas, then circles back and connects them to other ideas or delves more deeply into them. It is easy to see how a reader could feel a bit lost between the pages, but everything pulls together nicely in the end. If this book doesn’t help all its readers make changes, at the least, it lays out a theory of change that makes psychological sense and provides the solace of knowing that we are not alone in our struggles.