How We Age: A Doctor's Journey into the Heart of Growing Old 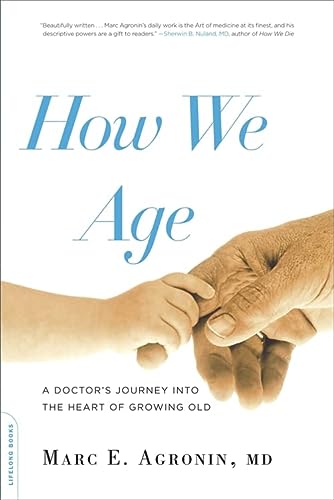 A career spent working in what some might term “God’s Waiting Room” has helped psychiatrist Marc Agronin, Medical Director for Mental Health and Clinical Research at Miami Jewish Health Systems and author of How We Age, to understand that aging is not a disease and cannot be cured.

While Dr. Agronin considered the need to prescribe medication for a patient with overt signs of depression, the voice of Stanley Jacobson echoed through his mind with a dismal warning that “old age is reason enough to be depressed if you dwell on it.” The voice had further accused colleagues of trying to reduce the struggles of old age to an illness. A further warning added that aging cannot be wished away or reduced to a “dysfunctional organ in the head.”

Among the many other experts on aging whose works are quoted in this book, Dr. Agronin revisits Gene Cohen’s thoughts on process and people, which Cohen considered the two paths to aging: and Leonard Hayflick’s ideas on the reversal of aging. Process, according to Cohen, provides the “how and why” of aging but is limited by the laws of physics and biology; with people, the limits are more varied and show how we age. Hayflick reminds us that aging is applicable to all living things. Aging equals change; and, time is the measure of change. Any attempt one makes to reverse the aging process of a living entity, in his view, is an attempt to reverse time itself.

To a large extent, How We Age is analogous to a memoir of the author’s medical experiences. He relies heavily on his personal experiences while interacting with and studying leading experts such as Erik Erickson, who has strongly influenced his thinking, and Sophie Freud, granddaughter of Sigmund, along with a multitude of other authorities on aging.

He then focuses on stories of many of the elderly patients he has encountered, as they have neared or passed over the century mark in their life’s journey, to convey specific information on different aspects of the aging process. The many poignant stories, related by Dr. Agronin, portray the specific events that have shaped the lives of his subjects in an intimate and intuitive way seldom detected through normal encounters.

The author postulates that successfully adapting elders tend to return and reinvigorate symbolic pursuits full of meaning and hope that capture the basic trust of early childhood. Those who are less successful seem to lack this hope and become preoccupied with immediate gratification of basic needs; food, warmth, bowel and bladder functions, affection, and relief of pain. During infancy, these behaviors are appropriate to have their needs met. In the last stage of life, however, these impulses are uncomfortably noisy and undignified. Still there is a drive to recapture this trust that has no words, yet carries the basic promise of life.

How We Age can be likened to a spiritual journey through old age. The author goes beyond the physical and medical aspects of aging to observe and feel the emotions of the dying. Why did 98-year-old Rose suddenly stop eating and die? Was it just “her time,” or did she decline so rapidly because of a lost love? How many of us would look closely enough at one her age to see the reality in her grieving?

Dr. Agronin relies heavily on experiences of Holocaust survivors, perhaps to some exclusion of other elderly persons who have followed a different life path. Yet, the stories are revealing and packed full of emotion. This reviewer questions how well his concepts of aging might play out when applied to the elderly Appalachians with whom she has worked, or to others who have not lived through the tragedy of war-torn cities; but for his assemblage of subjects, it is a story skillfully told and well worth the read. The reader’s emotional involvement in the latter half of this book was, for this reviewer, more akin to the feelings one has after having read a very compassionate novel rather than a treatise on aging—a book well written.