How Stella Learned to Talk: The Groundbreaking Story of the World's First Talking Dog 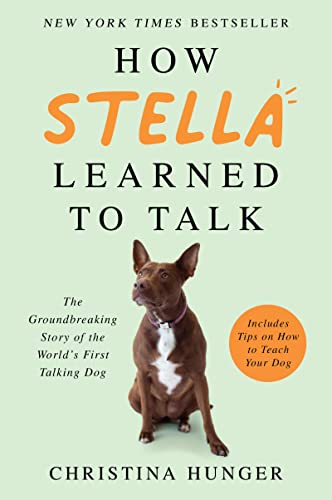 Let’s get this out of the way first: Stella does not talk. When you ask her the quality of sandpaper, she does not say, “Ruff.” Instead, she uses her paws to push buttons, and in that form has quite a lot of vocabulary: her board had 29 buttons at last count, each one connected to a word: “outside,” “go,” “park,” “beach” (they live in San Diego), “play,” “no,” “love you,” “walk,” “come,” and many more.

Stella can also combine words to make short sentences as in, “Stella go park.” She knows what she wants, and doesn’t make a lot of mistakes. It’s quite remarkable.

This is a very straightforward book that amply lives up to its title, even if, in fact, Stella does not “talk.” Christina Hunger, MA, CCC-SLP, is a young speech-language pathologist who works with children with autism and other disabilities. In her work, she became familiar with Augmentative and Alternative Communications (AAC), essentially all the ways people can communicate without talking. That might mean an iPad app or a computer with a speech-generating device. And it can mean a board with buttons that represent words.

It's not high-tech. A set of four VocalPups Dog Buttons, pre-programmed with a female voice to say “walk,” “play,” “food” and “walk” is $39 on Amazon, batteries not included. Hunger actually uses Learning Resources’ “Recordable Answer Buzzers,” programmed with her own voice, but these, too, are readily available. They’re no more sophisticated than Staples “That Was Easy” buttons.

Oddly enough, although dogs are readily trainable to do all kinds of things, there’s only a limited record of anyone teaching them to “talk.” Hunger does not delve into this history, but Don the Talking Dog (1905–1915) was a setter or pointer trained in Germany by Martin Ebers and Martha Haberland to say (in German) his name, “yes,” “have,” “no,” “cake,” and “quiet/rest.” Zoologists said he was a prodigy, and Science magazine said his skill was the “the production of sounds that produce illusions in the hearer.” The New York Times said in 1910 he was “an uncommonly intelligent animal.” He toured the vaudeville circuit in the U.S., and shared a bill with Harry Houdini before returning to Germany.

But maybe Don wasn’t all that smart. Audiences were gullible back then. And unlike Stella, Don mostly said just one word at a time, and had to be prompted. Stella puts together sentences on her own. She loves using her board.

The book unfolds as it happened. Hunger and her husband acquire a dog while living in Omaha, Nebraska, where she finishes her training. Stella is a combination of Catahoula and Blue Heeler. Using her training, Hunger realizes that their pup is displaying a lot of the pre-linguistic skills that toddlers have. “I have played with plenty of puppies, but none since I became a speech-language pathologist,” she writes. “Stella was already bursting with communication. If she were a child, I would expect to hear her first words soon.”

Well, we’re still waiting for actual vocalization, but it didn’t take Stella long to get the hang of using the buttons. Hunger starts with the established fact that dogs can understand words (“dinnertime,” “walk”), so if the buttons talk back she’ll associate them with desirable outcomes. “What would happen if I implemented speech therapy language interventions with my puppy?” she asks herself, and soon finds out.

When the couple moves to California, Stella adds “beach” to her vocabulary, and clearly let it be known if she’d rather go to the “park” instead of playing in the sand. By the summer of 2019, Stella knew more than 20 words. Hunger started a blog, and talked to her colleagues, most of whom said “gee whiz” and went on with their days.

But then in late 2019, People magazine called. It wasn’t long before Stella was the talk of the town—as Don was back in the day—on CBS This Morning, NBC Nightly News, Inside Edition, CNN. Soon Hunger had 500,000 followers on Instagram. People want to know how she came up with the idea. “The easiest explanation is that I worked with lots of children who use communication devices to talk,” she writes.

It’s to Hunger’s credit that all the media attention doesn’t persuade her to put Stella on the modern vaudeville circuit. The attention eventually fades, but she’s still working, still teaching her dog new words. And then she was asked if she wanted to write a book.

Sidebars in Stella address how dog owners can train their pets, too. Most of it is common sense, and there’s even a “troubleshooting” section. The bottom line is, “Be patient.” At the end of How Stella Learned to Talk, Hunger asks casually, “Will this open new doors for interspecies communications research? What animals could be next?” Good question. She doesn’t speculate, but pigs are very intelligent, aren’t they? Chimps share most of our DNA, but may not have the patience or the desire to please that’s basic to (most) dogs. Cats would also seem to lack motivation.

The implications of all this aren’t clear. This isn’t The Planet of the Apes. Dogs often tell us now when they want to go out. They do vocalize, just not in words. But if button training ends up depositing even one pile of poop outside rather than in, it’s worth it, right?