How to Sell a Poison: The Rise, Fall, and Toxic Return of DDT 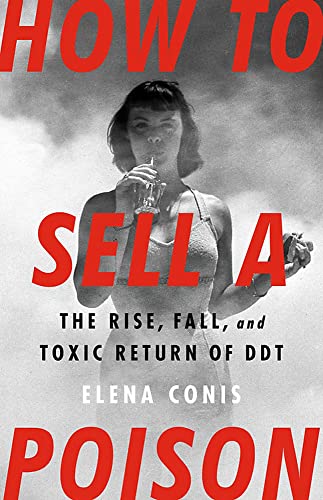 “A superb and well-researched account of a notorious chemical and the clash it has provoked between science and corporate doubters.”

Ah, the appeal of wonder working chemicals. Always in search of a quick fix, Americans once totally embraced the use of the chemical compound DDT, which was banned for its toxic health effects on wildlife and people following the publication of Rachel Carson’s expose Silent Spring (1962).

Until then, the poisonous chemical—celebrated for its World War II success destroying insects that caused malaria—was applied freely in American life.

Farmers sprayed it on crops. Homeowners killed ants and cockroaches with it. Municipalities dispatched DDT spray trucks to rid urban neighborhoods of insects.

In her absorbing How to Sell a Poison, historian Elena Conis shows how in the late 1940s the chemical was even used against the flies erroneously thought to spread polio. At the onset of an epidemic, towns and cities sprayed streets, playgrounds, and beaches, declaring them safe from polio.

“From New York to California, children played in the mist,” writes Conis. “In the polio years a cloud of DDT seemed one of the safest places to be.”

“Try something—do anything!” was the attitude during the polio scourge. Failing to halt spread of the disease, spraying succeeded only in lodging the DDT in human bodies, where it was absorbed in fat cells.

Conis, a former health columnist at the Los Angeles Times, teaches at the UC Berkeley Graduate School of Journalism and wrote the award-winning Vaccine Nation. She holds a PhD in the history of health sciences from the University of California at San Francisco.

In How to Sell a Poison, writing with authority, she traces the complex history of DDT with special attention to the ways in which the chemical industry and others have championed the pesticide’s benefits. Proponents fought the 1973 federal ban on its use, and in the 1990s campaigned strongly to bring back use of the toxic pesticide. They insisted its harms had been gravely overstated.

Scientists “sharply disagreed” for years about whether DDT was hazardous or safe. Further study always led to more disagreement.

Conis shows how the tobacco industry—another purveyor of harmful products—took advantage of this scientific uncertainty in supporting efforts to bring back DDT.

“The tobacco industry had no interest in selling the pesticide, of course; it was trying to sell cigarettes,” she writes. But it found DDT’s story to be a helpful scientific parable, one that, told just right, illustrated the problem of government regulation of private industry gone wrong.

“DDT, in this tale, never should have been banned in the first place. Companies, not liberal activists and politicians, should be trusted to make responsible choices. DDT’s fate showed what happened when government got in the way. To sell one poison, in short, the tobacco industry sold us a morality tale about another.”

For tobacco companies, DDT’s story distracted from scientific warnings on the dangers of secondhand smoke. “Distraction is one [the] tactics that various industry players have long used to protect markets for their products. Distract public attention away from unfavorable evidence. Discredit scientists and evidence you don’t like.”

When in the 1950s a Congressional committee held hearings on DDT in cities across the country, the public relations firm Hill & Knowlton flooded local reporters with press releases on the safety of chemicals. Later, when the US Public Health Service declared that smoking causes lung cancer, the firm tailored the disinformation campaign for the tobacco industry, arguing the science on smoking was uncertain.

Conis describes innumerable controversies over DDT, including the failed effort by Marjorie “Hiddy” Spock, sister of famed pediatrician Benjamin, to sue the federal government for the “poisonous trespass” of DDT spraying over her property in Brookville, Long Island, and Rachel Carson’s writing of Silent Spring, which benefited from the considerable research that supported the Spock case.

Her chapter on the work of the American Council on Science and Health (ACSH), founded in 1978 by Elizabeth Whelan, a young woman with public health degrees from Yale and Harvard, shows how a “new breed” of conservative think tanks began exploiting scientific uncertainty.

“We don’t feel a chemical is guilty until proven innocent,” Whelan often said.

To this day, says Conis, DDT remains in people, fish, and soil. Studies continue on its risks to human health and wildlife.

The “inherent uncertainty” of science always leaves an opening for “corporate doubt mongers” to foster skepticism, says Conis. She urges finding new ways to communicate about science to end “the game of catch-up we play when we pollute first, regulate later.”

A superb and well-researched account of a notorious chemical and the clash it has provoked between science and corporate doubters.