How to Ruin a Queen and the Diamond Necklace Affair 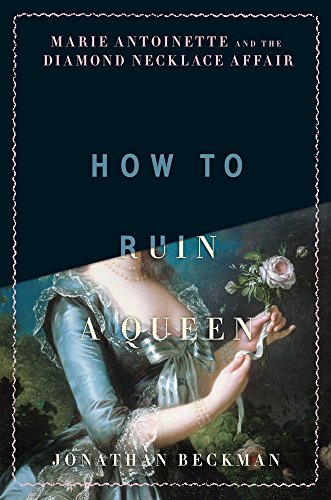 “How to Ruin a Queen and the Diamond Necklace Affair is a book that can be read again and again, each reading providing another layer of understanding.”

“Fashions change and the Diamond Necklace Affair now intersects with some of the most fruitful furrows of scholarly work on eighteenth century France. This scandal is considered a major epoch  on the road to regicide.” The year is 1786, and it only took a few years for the peasants to revolt, becoming disenchanted (and admit to) the monarchy’s corruption and wrongdoing.

Author/historian, Johnathan Beckman applies a deft hand to this task. Even though there are other accounts of this affair, he felt the event was pivotal tipping the scales toward revolution. Furthermore, the very center of the scandal involved diamonds, which speaks to the essence of excess in the monarchy.

It all started with a devious plan to secure a diamond necklace (2800 carats!) and burgeoned into a major upheaval in the history of France. The author concedes that this is such an improbable story that if it were offered as a novel, “it would be condemned for violating the laws of plausibility.” The text can read like a detective novel or thriller, but maintain the academic and scholarly inclusion of facts and anecdotes, all of which are well documented. Much of the records of the day consisted of letters and court records. The style expands to create a courtroom drama, along with endless political intrigue.

First there is a litany of characters: the queen’s circle. Frightened of her mother the Habsburg Maria Theresa of Austria, Marie Antoinette showed concern for the welfare of those in her realm with sensitivity and caring; however, always indulging in conspicuous displays of riches and excess too soon rankled the masses. Although assuming her position at a young age, she steadfastly executed her role, firmly securing her position. She remains in the background.

Consider as well, the undercurrent of a line of French kings, and a woman of that line who was determined to reclaim her ancestral right in spite of having to beg in the street as a child. She clawed her way into the queen’s circle. She is Jeanne de Sant-Remy, who forges an alliance with Marie Antionette, and the elaborate twists began. Jeanne indulged in high-risk deception, which bred dire consequences.

Luis de Rohan was destined for high position in the Church, despite his flippant manner. He fell into a position of coadjutor when his uncle was anointed bishop of Strasbourg, thus guaranteeing his successive position in this role. He became embroiled in the scandal.

Rohan and Jeanne formed an alliance, Rohan hoping to gain access to the queen and therefore expand his role within the monarchy. He would go to any length, but alas he was accused of forging the queen’s signature in order to acquire said 2,800 carat diamond necklace and got arrested in his ecclesiastical robes.

The question is, where is it? And who paid for it or would pay for it? Where does the culpability lie?

Gradually, the Bastille filled up with suspects. Rohan spent months in the Bastille, (in relative comfort) as a result of this controversy, but also had ample support from a huge extended family and many within ecclesiastical and royal circles. There he was joined by Jean and the mysterious Cagliostro, a character who mesmerized Rohan. All spent four months while evidence stacked up against them. They waited and withered.

Ultimately justice needed to be served, and the incident went to trial. At great peril, Rohan faced his accusers. Justice in those days was meted out more on the basis of believability than fact. Opinion ruled outcomes. Here, the world became rife with shifting alliances, betrayals and despair. It took months to sift through evidence and for the jury to come to an agreement. Separate investigations were conducted by parliament and various factions within the hierarchy of the church.

This tale is mentioned in other historical works of the time, but Johnathan Beckman has made it come alive with his vivid, detailed prose and fascinating storytelling style. It is a work of a competent historian, yet is compatible with the interests of the ordinary reader as well.

Readers will come away with a greater understanding of the time. For example, literacy rates were rising, if slowly; ordinary people felt equipped to weigh their opinions about royalty and their excesses. The printed media thrived. Times were changing, and there was no returning to the former rigid class hierarchy. Tracing the history of developments following 1789 showed continual movement toward greater rights of the ordinary person—at the expense of the monarchy.

The author’s style raises a question about how much of history is written. The author eschews inventories of dates and treaties and instead tends to capture the epoch in a way that is memorable and useful. Would history itself benefit from more of this model? Picture the Bastille being furnished with comforts; imagine the human detail that sticks with the reader long after dates and other facts have faded.

How to Ruin a Queen and the Diamond Necklace Affair is a book that can be read again and again, each reading providing another layer of understanding.