How Rights Went Wrong: Why Our Obsession with Rights Is Tearing America Apart 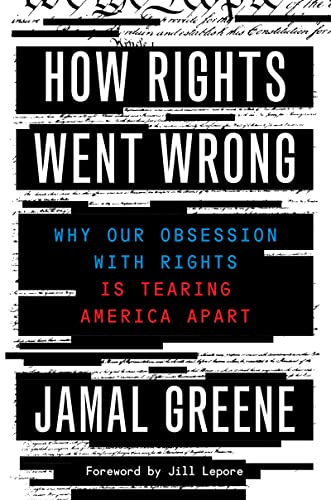 “The author sees more than 200 years of judicial interpretation of fundamental rights as having devolved into a zero sum game, with winners and losers declared by unelected judges, leaving half the country unhappy each time.”

In 1776, the Declaration of Independence proclaimed that “all men” are endowed by their Creator with “unalienable Rights,” and that government was instituted and charged with the sacred duty to “secure these rights.” But the first Congress was derelict in that duty, creating a constitution that, at the time of its ratification in 1788, remained silent on those rights.

It would take another three years before a Bill of Rights would “secure” them, though not for “all men” but only white men, and certainly not for women. And if by “secure” one means simply to write them down as generalizations, sometimes vague at best, then secured they were.

And now here we are, over two centuries later, still fighting over what those rights are, what they mean, and to whom they apply, fights that threaten to split the nation in half. Therein lies the problem with what author Jamal Greene terms “rightsism,” the struggle between “those rights that count . . . and those that don’t count,” in his thought-provoking new book How Rights Went Wrong. And just to be clear, adding an “ism” to something is rarely a good thing. See, e.g., communism, fascism, Nazism, McCarthyism, etc.

When claims to rights conflict, it’s not the Constitution that is at fault, Greene says. Instead, he points his finger at the federal judiciary. “Our judges resolve these conflicts in ways that are morally arbitrary, homing in on arid precedents, logical fallacies, or anachronisms. Too often judges believe they must award total victory to one party’s rights or the other.”

The author sees more than 200 years of judicial interpretation of fundamental rights as having devolved into a zero sum game, with winners and losers declared by unelected judges, leaving half the country unhappy each time.  “Conflicting rights can’t both be absolute,” he writes, “and so when U.S. judges face a conflict of rights, they cancel one right or the other.”

So, what is his answer? A “strategy of rights mediation,” which he defines as not “about simply ‘balancing’ one side against the other or maximizing social welfare in the way of a crude economic formula.” Instead, it’s about “paying unwavering attention to the facts of the parties’ dispute.” (emphasis in original)

And the decision-making, he says, should rest with elected politicians and communities and not black-robed judges. After all, it is those local representative bodies—legislatures and juries—that were considered by the Framers of the Constitution as “best suited to reconcile the competing demands of rights bearers.”

So what role does that leave our federal judges? Certainly not declaring rights, Greene says. “Judicial supremacy of this sort wasn’t the Framers’ vision.” Instead, he contends that judges should be tasked with simply reconciling rights, a balancing of interests that is fact-driven.

Although the author raises legitimate arguments for modifying how rights cases are resolved, the notion that the current, imperfect process fails to reflect the original intent of the Constitution’s framers is not necessarily accurate. One of those framers, Alexander Hamilton, said in Federalist Paper No. 78: “The interpretation of the laws is the proper and peculiar province of the courts.”

For that matter, should the Framers’ original intent even matter in the first place? While “the idea of a court intervening to prevent a public university from disinviting a provocateur bent on dividing students would have mortified the Framers,” so, too, might the abolition of slavery or granting suffrage rights to women, neither of which existed in the Constitution as originally ratified.

Enlightenment comes (sometimes too slowly) and things change, and a good argument can be made that the catalyst for such change is often the very conflict of rights that the author decries—the irritation in the oyster that creates the pearl. The question is whether the United States is ready to exchange a time-tested, albeit imperfect, procedure for an experimental (for us) new approach.

Greene cites examples of other countries that follow this method, seemingly with great success. But cultures and traditions in other countries do not necessarily provide a good roadmap for this country. Would rights mediation actually work in the United States? Or will it simply leave each case up to the situational ethics of a given jury or legislature based on the peculiar facts of a case, resulting in a mishmash of results that provide no real guidance for others? Who knows?

It’s an open question, and Greene makes clear that he welcomes disagreement. “I don’t have all the answers to these challenges, and neither do judges,” he writes. “There’s no shame in that.” Instead, he merely wants to provoke thought and discussion because “we all have a part to play in figuring out how to live together.”

In that case, mission accomplished.