How to Read the Air 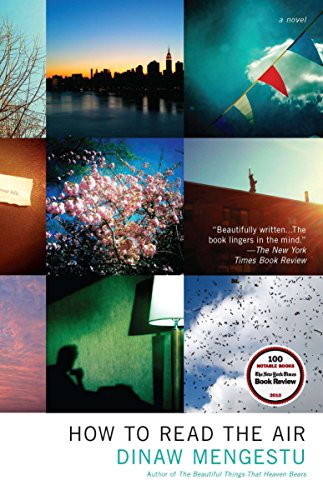 How to Read the Air finds Dinaw Mengestu building on many of the themes that made his debut novel, The Beautiful Things That Heaven Bears, both a delight and a sorrow to read. In his sophomore outing, the author once again offers a meditation on coming to America and the complications inherent in leaving the past behind. This time around, however, the narrative is more densely layered, and Mengestu’s storytelling consequently comes off as more refined.

The novel centers on Jonas Woldemarian, the adult son of Ethiopian immigrants whose open hostility toward each other has left him emotionally scarred and dangerously detached from the mess that he’s making of his own life. As the novel opens, Jonas reveals that his marriage has fallen apart, that he’s lost his job, and that he is, for all intents and purposes, homeless. Yet as Jonas reconstructs the events that once led his parents to the brink of self-destruction, he moves closer to the realization that for all of his failings—indeed, for all of the failings of humanity—he is still capable of finding wonder in our otherwise fallen world.

Throughout the novel, Mengestu proves himself a master storyteller by weaving multiple narratives into a seamless whole: the story of the Woldemarians failing to assimilate, the story of Jonas standing idly by while his marriage falls apart, the story of his journey back down the roads that his parents once traveled, and, most perplexing, the completely fabricated family history that Jonas invents to make sense of it all.

Ultimately, it’s his penchant for fabrication that makes Jonas such a compelling character and How to Read the Air such a complex read. Early on, Jonas admits to embellishing the personal narratives of his clients at a refugee resettlement center in Manhattan. Later, he employs the same techniques to imagine a life for his deceased abusive father—in part to explain the abuse, but mainly to conjure a discernible past from the violent Rorschach blots of history.

What Jonas wants is what we all want: a sense not only of the big picture but also of our place within it. That so many of the characters in the novel play along with his lies speaks to the lengths that we as a species will go to in order to make something meaningful of the past—or, for that matter, of the present. With each new, oh-so-believable yet equally false detail that Jonas divulges, Mengestu implies that we are all culpable when it comes to accepting lies in place of history. Yet he also forgives us, for How to Read the Air is nothing if not a novel about the human desire to make sense of the world even when doing so involves bending the truth beyond recognition.