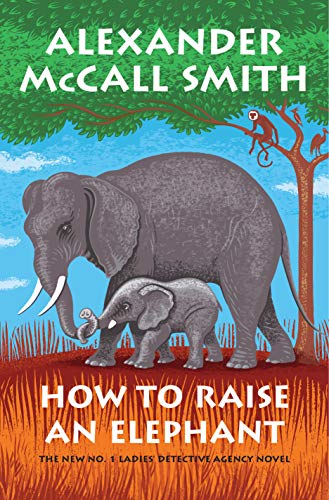 “Mma Ramotswe and her allies practice that love of land and courtesy to each other in gently amusing ways that eventually resolve the mysteries, potential crimes, and tensions of their lives. In a time of pandemic, there could be few more rewarding and soothing tales to read.”

Alexander McCall Smith’s No. 1 Ladies’ Detective Agency series can be relied on for tender and kind surprises, and the reliability of love and trust among the main characters. Of course they have their flaws—Precious Ramotswe, who leads the unusual detective agency in Bostwana, is a woman of “traditional build” and careful attention to the guidance found in her detection manual written by Clovis Andersen. She can thus be a little short-sighted, and a bit hard-wearing on her small but practical van. Her assistant, Mma Makutsi, a secretarial school graduate with big dreams, tends to be suspicious and not very generous in her assessments of potential clients. And then there is Charlie, the brash youth employed part time by the Mma Ramotswe and part time in the adjoining car repair business of her husband Mr. J.L.B. Matekoni.

In How to Raise and Elephant, the first mystery provided is fairly readily solved: The bent tailgate of the detective agency’s van and its powerful earthy scent after Charlie borrows it lead directly to the apprentice’s use of the van to transport a baby elephant. But Charlie’s neighborhood is not at all suitable for a growing elephant, even though it appears to consider him its mother.

“There had been many occasions in the past when they had been obliged to clear up some mess left by Charlie. They could remain uninvolved if they discovered somebody else was looking after an elephant—such an elephant would be none of their business—but there was a sense in which any elephant in Charlie’s keeping was their problem, or soon would become just that.”

And negotiating a future home for the friendly but ungainly beast requires all of the skills in courtesy and gentle teasing that Mma Ramotswe can summon.

Meanwhile, the detective agency owner has a family-related plea for financial assistance that Mma Makutsi mistrusts. Whether to believe the sad tale of a relative and donate accordingly requires attentive investigation, according to the best principles of detection.

Alexander McCall Smith’s storytelling provides great charm as he unravels the experience and thinking of his rural but increasingly wise protagonists. A classic example is how Mma Ramotswe ponders the role of royalty, including the Queen and the Queen’s son, Prince Charles:

“And there was Prince Charles, who she knew loved Bostwana. When he came again to visit the country, she would try to invite him for tea. He would be too busy to come, of course, and there were people around him who would fend off invitations, but she knew they would have a great deal to talk about: about the rains and the crops; about looking after the world; about remembering when all is said and done, we lived on the land and had to give the land the love that it needed if it was to continue to provide for us.”

Mma Ramotswe and her allies practice that love of land and courtesy to each other in gently amusing ways that eventually resolve the mysteries, potential crimes, and tensions of their lives. In a time of pandemic, there could be few more rewarding and soothing tales to read than How to Raise an Elephant.