How Quickly She Disappears 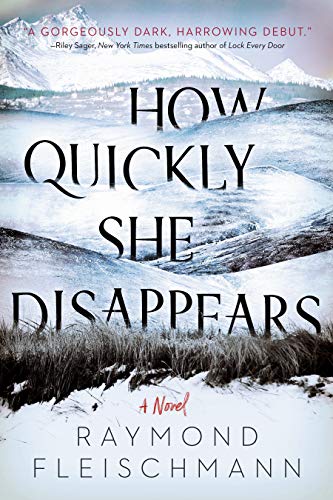 “A subtle, but ceaseless undercurrent of tension throughout builds to a shocking crescendo in the final pages.”

In 1941, Elisabeth Pfautz moved to a remote village in the Alaskan bush with her husband John and daughter Margaret. John has accepted a post with the office of Indian Affairs, a position that often takes him away from home for extended periods of time leaving Elisabeth in a continual state of loneliness.

Eleven-year-old Margaret is somewhat of a whiz kid. She prefers H. G. Wells instead of Nancy Drew, logic problems instead of age appropriate toys, and read the first three letters of the encyclopedia from cover to cover like a novel.

"Since moving to Alaska, Elisabeth and John had educated her themselves, at home, and Margaret took to everything they taught her with a speed and retention that was sometimes shocking. . . "

She also bears an uncanny resemblance to Elisabeth's twin sister Jacqueline who went missing 20 years before.

Early one morning, a bush plane lands on the local gravel landing strip, and Margaret, expecting a science book of experiments designed to be performed at home, thinks it's the local postal delivery. Elisabeth rushes off to pick up packages. But it's not the postal delivery plane. It's an unfamiliar aircraft emblazoned with a German Cross, the emblem of the WWII German Armed Forces. The pilot has exited the cockpit and is sitting above the windshield checking out the surroundings.

". . . from his angle high above her, the man owned a certain look of intensity that wasn't especially inviting. He reminded Elisabeth of a falcon or an eagle. Somehow, even as he smiled, he seemed to scowl."

Elisabeth is uncomfortable, but does not retreat. Instead, she introduces herself. The man, speaking with a heavy German accent, says his name is Alfred Seidel, and after a brief conversation during which she mentions that her husband is away, tells her he's exhausted and invites himself to stay in her guest room:

"A place to sleep. It wasn't an odd request in itself. Elisabeth and John's home was the largest in Tanacross: three bedrooms, two fireplaces, a dining room adjacent to the kitchen, and a living room not far from that. And all of this was only one half of the house; the southern half served as the local school, the reason they had come to Tanacross in the first place. . ."

She and John had hosted many guests during their time in the bush, and though a bit unsettled by Alfred's request, Elisabeth agrees:

Right about now readers are undoubtedly thinking uh oh. And rightfully so. He is not a welcome guest. The man is downright peculiar. He moves his lips silently talking to himself, puts his muddy boots on his pillow, and swallows pebbles for breakfast. During naps, his snoring roars through the house.

Mack, the local handyman in the tiny village lives near the landing strip. He breeds malamutes and is the go-to guy for anyone who needs something fixed—chairs, clocks, lanterns, guns, boats, fishing reels, traps, sleds. When Elisabeth tells him about Alfred and his bizarre behavior, Mack immediately senses danger and gives her a warning. Though conflicted, she dismisses it out of hand. I can take care of myself, she tells herself.

Frequently and without warning author Raymond Fleischmann intersperses backstory chapters about the missing sister, Jacqueline. Traumatic memories of her twin's disappearance have haunted Elisabeth her entire life. The last she knew about her secretive, adventurous twin was that she had met an interesting, mysterious older man. At the time, Elisabeth was intrigued rather than concerned:

"Jacqueline isn't bad—she's fun. Despite her sass and scowls and short temper, you wouldn't want her any other way. Her mischief makes your life worth living. She adventurous. She's brave. She's exciting. . . ."

Then she was gone, and guilt began a strangle hold on Elisabeth.

So when Alfred hints that he was involved in Jacqueline's disappearance, Elisabeth allows herself to be drawn into this stranger's spellbinding web. He agrees to tell her what he knows but asks for some things in return. One of them is Margaret.

A subtle, but ceaseless undercurrent of tension throughout builds to a shocking crescendo in the final pages. Here's a little taste of what's ahead:

"Instantly, he rushed at her. And then they were fighting for the rifle, stumbling back and forth and side to side around the cabin. Their shoulders slammed against the northern wall . . . and a shower of dirt and dust rained down on them. His hands were wrapped around the stock and barrel of the rifle, but she wouldn't let it go. He was strong, and his eyes were wild with fury, but also with terror. . ."

In addition to the unrelenting suspense, readers are unlikely to find more authentic descriptions of Alaska's back country than those offered by Fleischmann in this absorbing tale that has Netflix Original written all over it.