How Photography Became Contemporary Art: Inside an Artistic Revolution from Pop to the Digital Age 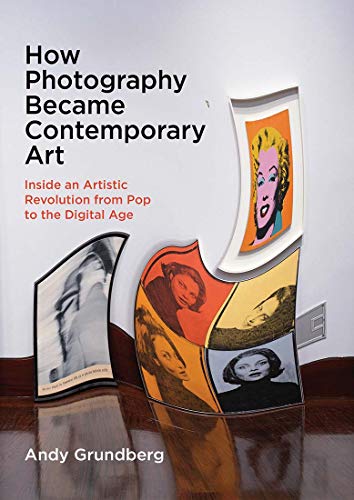 “a deep intellectual probe into the importance and significance of photography as it morphed from a secondary tool of artists into photography’s acceptance as the art itself.”

Andy Grundberg takes the reader on a very deep dive into the transformation that he witnessed and recorded as photography emerged from the periphery to the mainstream of the art world in the 1970s and beyond. This is not a book for the faint of art; rather it is an encyclopedic examination of an evolution that coincided with the arrival of the author on the New York art scene as photography burst into the esthetic consciousness.

Grundberg defines his thesis and then provides evidence that the emergence of fine-art photography was a particular outgrowth of performance and conceptual art, both of which required photographic evidence for their emphemeral experiences.

Grundberg is best known for his tenure as a photography critic for the New York Times from 1981 to 1991. But he seemed to be everywhere as the New York City art scene exploded from the 1970s to the present. He was omnipresent when the art revolution took to the streets and new galleries and publications emerged to chronicle the explosion. Andy was everywhere, and like Zelig, he was present when history was being made. He seems to have engaged with or encountered most of the obscure artists who later became household names.

In his beautiful and insightful introduction to the book, Grundberg describes his mission as both “art history and memoir” and he certainly achieves that ambition. But the book accomplishes a lot more than those two aims. The text is a deep intellectual probe into the importance and significance of photography as it morphed from a secondary tool of artists into photography’s acceptance as the art itself.

Galleries devoted to photography and museum shows of the still image were few and far between before 1970. Grundberg examines and sifts the fertile soil that led photography to blossom into the ripe fruit that collectors began to purchase and that scholars began to appreciate and research. Tangential to these developments, photographic art began to take hold as a legitimate department of instruction in American universities and art schools.

At times chatty and catty, self-referential, and self-deprecating, Grundberg can suddenly step on the accelerator and launch into a sentence like the one on page 57. “In short, photography’s unique talents . . . were not simply useful to Conceptual artists and their kin; they were phenomenologically, ontologically, and epistemologically interesting.”

The author has a way with words. His intellect is matched by his awe as he saw and chronicled seismic shifts in the art establishment. At times his eyes and his prose are wide open with wonder. At other times he is laser-focused and scholarly.

This is a complicated book. It is simultaneously diary and diatribe. It has wit and wisdom, but it also carries the heft of a college textbook. Grundberg can be opionated and dismissive; he’s a critic but also a caretaker. There’s a sense of melancholoy in his writing as he chronicles the naif he once was as he first appeared in New York City after graduating Cornell.

Using an apt theater analogy, the author captures his amazement as he recognizes how timely and fortunate he was “. . . to have landed in New York when I did, because I had a front-row seat as the curtain came up on photography’s transformation from a minor role to a lead actor in the drama of twentieth-century art.”

Fortunately Andy Grundberg has chosen to invite us along with him to this theater of photography, and he has kept the seat next to him warm and inviting.

His book is stuffed with so much research that he is guaranteed a invitation to The Name Droppers Hall of Fame. There are 130 excellent illustrations throughout the book which are simultaneously informative and revelatory.

In short, How Photography Became Contemporary Art is a must read for those who want insight into the art world and the art womb of New York City from the turbulent 1970s to the present. Grundberg captures an era and his life in the arts with precision, purpose, and perspicacity.