How The Mighty Fall: And Why Some Companies Never Give In 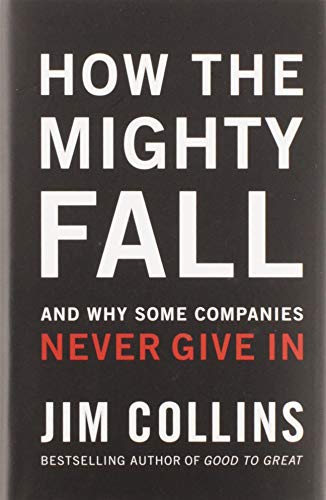 In some ways, Jim Collins’ newest book, How the Mighty Fall . . . and Why Some Companies Never Give In, is like the last installment of a trilogy; while it’s not necessary to read his first two books to enjoy this one, it certainly doesn’t hurt.

For those of you that have read Good to Great, and Built to Last, Collins’ previous forays into management analysis, How the Mighty Fall . . . tackles the flipside of most management books: what to do to ensure failure. As with his other works, Collins pours through the histories of some of the most well known of companies—Hewlett-Packard, Ames, and Merck to name but a few—in order to draw some insight into how they began their descent into, “capitulation to irrelevance or death.”

In fact, he lays out a five-stage process in which to destroy a once sound business:

3. Denial of risk and peril,

5. Capitulation to irrelevance or death.

Unlike his other two books, however, the intellectual rigor that exemplified his writing is ever so slightly less. He still utilizes his methodical approach to business analysis via a “matched-pair” analysis, such as comparing Walmart to Ames—the former is on track to being a trillion-dollar-a-year company; the latter is deader than an eight-track tape player. However, he has only provided eleven such pairings and paints his picture with much broader strokes.

Having said this, it’s hard to find fault with his careful and sound reasoning, such as his noting that humility with pointed dedication is the antidote for a downward spiral. Even in Stage 4, the step before oblivion, Collins notes that companies can still pull themselves back from the precipice.

Sage advice that’s the more relevant now than ever. If there’s any one real fault by the author, it’s that he didn’t publish How the Mighty Fall . . . just slightly earlier.

Perhaps Toyota still has time to pick up a copy, or two.

Reviewer Logan Lo is a small business consultant under the guise of an intellectual property attorney and a certified general real estate appraiser. He is currently an associate at the commercial litigation firm Woods & Lonergan in their Intellectual Property and Real Estate Practices. He resides in the Upper West Side of New York City.