How to Mellify a Corpse: And Other Human Stories of Ancient Science & Superstition 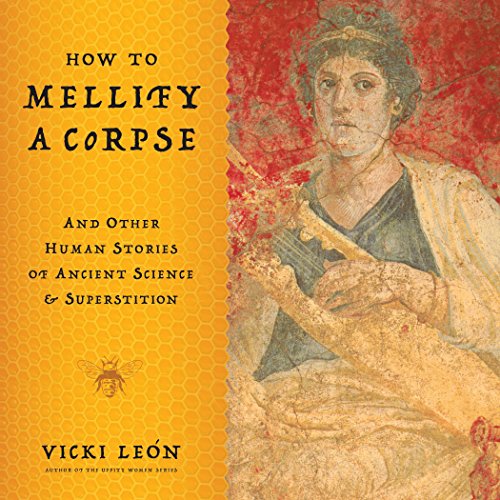 Her books are all fairly similar in layout, beginning with an introduction that describes her goals and some basic facts the reader should be familiar with before beginning their journey in words. In this case, the introduction is well written though simplified for the layperson and open to criticism by experts. When we understand that the author’s goal in this book is to make us aware of how similar the ancient Mediterranean society was to our own society regarding concurrent beliefs in both science and superstition, these expert criticisms miss the mark. That is not to say that this should be considered anyone’s only source of evidence. But it is a good jumping off point to think about these issues.

León uses ancient, secondary, and primary reference works to collect her stories about science and superstition from Mesopotamia to North Africa to Rome’s western provinces. She covers a thousand years of history from 700 bce to 300 ce though she uses the older dating notations (B.C. and A.D. ) that many current scholars are abandoning. The book is arranged geographically not chronologically, though León includes dates within her essays. How to Mellify a Corpse is really a series of essays about famous and infamous thinkers as well as specific ideas and developments.

In six chapters she looks at a variety of subjects including mathematics, the gods, magic, technology, and philosophy—to name just a few. Each chapter begins with a map so that the reader can have a basic understanding of where in the world the next group of stories emerged. Often the margins include line drawings accompanied by quotations or little factoids to highlight an idea or entice the reader to continue. In all there are 88 essays that are written in an entertaining yet informative fashion.

Aside from the academic criticisms that could be directed toward this collection of essays, the book fails to fully examine the common ground between the ancients’ ways of thinking and our modern view of the world. Other than a mention in the introduction, current beliefs are basically ignored in favor of snapshots of the past. As such, the casual reader will simply be left amused, confused, or horrified by the strange and sometimes contradictory belief systems encapsulated here.

How to Mellify a Corpse is a great joy to anyone interested in ancient history or the topics of science and superstition. It is neither a history resource nor a scholarly textbook and should not be judged by those standards. Take it for what it is: a fun introduction to foreign and familiar ways of looking at the world.