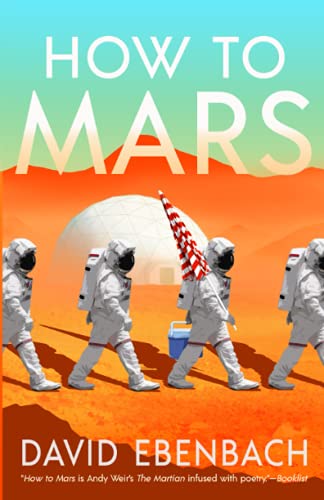 What would happen if the first manned (and womanned) mission to Mars was chosen through a Survivor-style competition and the mission itself was a reality show? That is the intriguing premise of David Ebenbach’s How to Mars.

Being part of the Mars mission is the adventure of a lifetime. Literally. Each of the six mission participants has signed up with the understanding that they won’t be returning to Earth. They’ll devote the rest of their lives to researching the red planet (some of them say it’s orange). The single cardinal rule of the mission is “No sex,” because it could lead to deformed babies and potentially break up the group.

After two years on Mars, ratings are down, and the crews’ research is stagnant. As one might expect, two of the crew members, Josh and Jenny, begin an unsanctioned love affair and break the cardinal rule frequently enough that Jenny becomes pregnant. The pregnancy is the novel’s primary storyline, intertwined with glimpses of the selection process for the mission and the presence of unseen Mars life that refer to themselves as the Patterns.

The novel is told through revolving points of view, including that of the Patterns, the not quite corporeal definitely sentient beings that already inhabit Mars. In addition, Ebenbach uses alternate texts such as some of the characters’ research reports and portions of the somewhat idiosyncratic handbook for the first “Martians” provided by Destination Mars, the fictional organization that is both funding the mission and airing the reality series.

As the first humans on Mars, the crew has the opportunity to create their own society. How do you convince everybody to be part of their society when there are no traditional consequences? The excerpts from the Destination Mars handbook address these and other issues, adding layers of flavor and backstory to the movement of the story. The voice of the handbook has the somewhat snarky, somewhat goofy flavor of Douglas Adams’ Hitchhiker’s Guide to the Galaxy (and How to Mars clearly owes that series a debt of gratitude). The opening of the handbook section titled “How to Organize Yourselves” provides an exemplary sample:

“The truth is that we wish we were you. Not so much that we would trade places—as we said in Section 2 of their handbook, the thought of trading places is both thrilling and also frankly terrifying—but enough that we have significant doubts at night while brushing our teeth and we wonder if we’ve turned out to be who we hoped we’d be.

“And why do we envy you? We envy you not only because you get to go somewhere that people have never gone, but also because you get to be in charge of a world. Think about it: you will be the entire population of your new planet. You will be everybody. As in, when people say “Martians,” it’ll just be you. And so you get to start over—you won’t have the United Nations looking over your shoulder, won’t find the taxman at your door, won’t ever get called for jury duty again in your lives.

“The question is: What will you do with this fresh start?”

As expected, the road to this fresh start isn’t easy. The crew breaks rules. They fight with each other. Equipment fails. And there’s the Patterns. As a plotline, it seems tacked on, as though perhaps Jenny’s pregnancy wasn’t enough and an editor or beta reader suggested throwing in some sort of pre-existing life on Mars. The Patterns are a compelling concept, but the storyline comes off as more of an afterthought than a revelation.

How to Mars has a lot going for it. It’s aggressively charming—the kind of book one thinks one ought to like, even a book one truly wants to like. Ultimately the novel doesn’t quite equal the sum of its parts. Once key plot lines begin to be resolved, the book ­feels a bit rushed, making the ending less than satisfying. Ebenbach has some worthwhile musings on the idea of what makes us human, but these musings don’t stick. It’s a relatively enjoyable summer read, not the kind of book that lingers.