How the Light Gets In: A Chief Inspector Gamache Novel 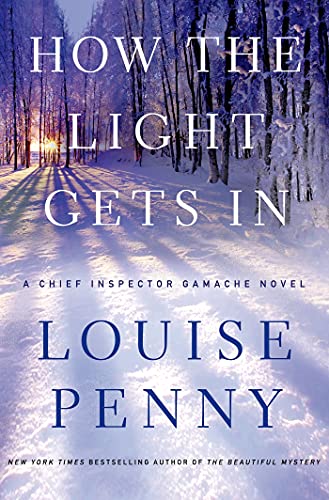 “What else can happen in this mystical, magical, yet terribly real world?”

You know an author has successfully created a believable world when you care about what happens to the characters—especially when you consider dropping the series in order to avoid the characters’ pain.

That was a problem with Ms. Penny’s previous book, The Beautiful Mystery, where a surprise turn plunged one of the primary characters in the deepest of doo-doo and left him hanging at the end of the book. The development came so unexpectedly, and for some readers unrealistically, that it overshadowed the main plot and other events.

Thankfully, all the troubles that built up over the series are resolved in How the Light Gets In, the latest in the Chief Inspector Gamache and Three Pines saga. As well, the closure is so tidy that the series could either end here or carry on a new level, in a new context, in the next book.

Perhaps that’s just as well, because the series has been showing signs of fatigue. As always, Ms. Penny writes beautifully, evoking the solid (“snow . . . was a chore that fell from the sky”) and the invisible (“If Madame Ouellet lived in his memory, she was several mountain ranges away from today. He cast his mind back, moving rapidly over the terrain”) with poetic confidence.

But over nine volumes, Ms. Penny has wrung every last drop of angst out her characters, and knocked off the maximum number of people that Three Pines can handle with credulity. As well, her plot-managing hand is showing through more often, so that some events seem forced rather than arising from character or situation.

In this book, we’re at least back at the enigmatic Three Pines with its lovable, quirky residents for much of the action. Here Gamache’s nemesis in the corrupt Sûreté de Quebec, and his saving grace(s) in the village, collide in high drama—to the point where Three Pines’ very existence teeters on the brink of destruction, along with Gamache himself.

Given the dark undercurrent of these stories, the reader can’t assume a happy ending. So we wonder: Can Gamache save them all—as we so want him to—or will he fail again where it really counts?

It takes much of the book to realize how much smarter Gamache is than his enemies. The narrative leads away from key details that support his cleverness in sort of a reverse red-herring, where the main story advances directly into hopeless cul-de-sacs while the trivial details are hidden by misdirection but pop up just in time at the climax.

The end brings relief from many books’ worth of suspense and psychological agony. If nothing else, Ms. Penny knows how to plumb the depths of people’s souls and make the reader relate.

But she leaves us with a new mystery: Will the story continue? What else can happen in this mystical, magical, yet terribly real world?

Only the author knows for sure . . . and hopefully loyal readers will be enlightened in the not too distant future.