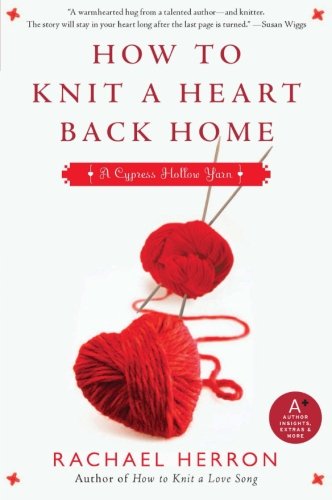 In today’s looks-based culture, it seems more believable in the comforting world of fiction. Rachael Herron champions the idea in How to Knit a Heart Back Home.

Lucy Harrison is the plain Jane heroine following in the footsteps of her late grandmother. From operating her financially strapped bookstore to habitually wearing her threadbare, hand-knitted sweater, Lucy willingly submerges her own identity in that of the deceased.

Her life in the small coastal California town of Cypress Hollow is so quiet that the penultimate highlight of her romantic life occurred all the way back in high school with bad boy, Owen Bancroft. As the story begins, Owen is back home for the first time since their adolescent encounter. Needless to say, this sends Lucy into a tizzy.

Herron depicts Owen’s nostalgia as on par with Lucy’s, yet throughout the narrative the concept rings false. First, Owen does not recognize Lucy when they see each other for the first time. He’s had several romantic interludes with other women throughout the years, one even a few weeks before returning to Cypress Hollow. He certainly is not the romantic hero who has been pining away for Lucy all these years. Since his abrupt departure, he never made a single attempt to reconnect with her.

As they begin to develop a relationship, the basis of it seems purely physical on Owen’s side. Again and again, his attraction to Lucy is, for the most part, based on satisfying his desire. While this may be gratifying to Lucy to some extent, she is thrown into a constant state of upheaval as they begin to get reacquainted with each other. The further Owen advances, the quicker she is to pull away, but not before he moves her another step closer to his ultimate fulfillment.

The descriptive details relating to the amorous scenes are a tad on the cheesy side. They are more appropriate to a romance novel with a Fabio emblazoned cover than a love story with a knitting/literary theme. The frequent mention of prophylactics puts the book more on par with being a poster child for a STD awareness campaign. Herron even has Lucy’s mother walk in on the couple while in the act. This cringe-worthy moment is the very antithesis of what any romance reader wants to uncover in a love story. It gets even worse when instead of bolting from the room, she tries to carry on a conversation with the amorously intertwined couple.

The saving grace for knitters is wrapped up in the legendary status of Eliza Carpenter. The fictitious icon of knitters the world over has turned Cypress Hollow into a mecca for those wishing to click their needles in their idol’s former place of residence.

The drawing together of Lucy and Owen is based on the discovery of Eliza’s unpublished patterns. The reason Owen is back is because of his guilt over his mother’s dementia and having to place her in a nursing home. After selling Lucy boxes of his mother’s old books, the valuable papers are uncovered. The opportunity to work together on the project forges their strengthening bond.

However, when Owen begins to see Lucy as more of a person than an object, he becomes quite overbearing. He wants her to quit being a volunteer firefighter/EMT in order to ensure her safety. Being a former cop, he draws his gun on Lucy’s brother mistaking him for a burglar. He even investigates her past by snooping through her private documents. Only by asserting herself does Lucy come to gain equal footing in the relationship.

The believability of some points is questionable. Can Lucy really afford a house of her own when visitors only stop by her bookstore to use the restroom or help themselves to the free coffee? Would the town bombshell really prefer Lucy’s earflap-hat-wearing, barely communicative, younger brother to the dashingly handsome, Owen, who just happens to be her old high school flame? At times, a slip here or there is allowable, but when questionable details start to add up it begins to detract from the work as a whole.

Overall, through the power of a love story, a meek knitter/bookworm converts the town bad boy into a romantic, leading man.