How to Kidnap the Rich: A Novel 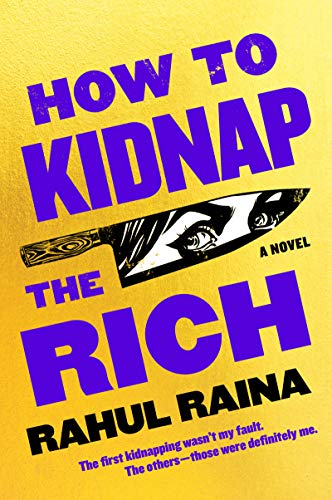 “This fresh comic thriller is entertaining from start to finish. Raina’s bright voice shines through thanks to his narrator’s unique viewpoint and perceptive observations.”

Raina paints a hilarious yet poignant picture of modern day India in his first novel, How to Kidnap the Rich. The author’s voice is fresh, and so is his breezy narrative of the twin evils of greed and ambition. When the stakes are high, Raina’s characters will go to the limits, and they’ll take us along for the ride.

Narrator Ramesh Kumar is a poor boy with no money and a mean, abusive father. Ramesh is doomed to selling tea instead of going to school until a French nun, a misfit herself, takes charge of his education. To lift himself from poverty, Ramesh has to put that education to use. He starts a lucrative business of taking exams for rich, lazy boys who might otherwise fail their tests and ruin their chances of attending college.

Ramesh feels no remorse for his makeshift profession. They do it in China by the buckets, don’t they? Why shouldn’t he? Although he dislikes his latest, rudest client, Ramesh enjoys preparing for the exam. But he accidentally takes things too far. He tests so well on the important All India college entrance exam that Rudi, his young client, appears on TV screens all over the country. Rudi has no choice but to lie at every opportunity. How did he score so highly? He claims it was natural talent.

The Saxenas, Rudi’s parents, try to kid themselves that their son is as brilliant as everyone says he is. They attempt to cut Ramesh off completely, but our narrator is no fool. When Rudi is offered the job of being the host on a TV quiz show, Ramesh wants his cut. To earn it, he becomes Rudi’s manager.

Ramesh’s luck goes downhill from there. He has created such a mess that he has to call in favors, use intuition, invent new rules, and eventually resort to kidnapping. Meanwhile Rudi endorses products, ramps up his social media profile, and becomes even more obnoxious.

This fresh comic thriller is entertaining from start to finish. Raina’s bright voice shines through thanks to his narrator’s unique viewpoint and perceptive observations. Ramesh criticizes India thoroughly for all the country’s corruption, but he is also quick to poke fun at the West for setting bad examples. No one is safe in this novel—not even the narrator!

Even though Ramesh suffers, he does enjoy some pleasures along the way. He instantly falls for the producer’s beautiful assistant: “I couldn’t help but notice her hair smelled slightly of roses and her purple earrings caught the light as she laughed and propped her chin on her hand—here I am going on about her looks, but it was her intelligence, her determination, her drive, the way she made you feel as if you were the center of the room, that her mind was fixed on every word I said.” Ramesh is so used to being discounted that he can’t believe anyone so poised, gracious, and beautiful would notice him, let alone listen to any of his ideas.

Ramesh is duly critical of Priya’s boss: “Oberoi was one of those men who became less impressive the more you talked to him. Wealth, taste, forcefulness, hair, teeth. But slowly you saw there was nothing there, and one day you were amazed you had ever found anything worthy about him at all and wondered at your own stupidity.” Ramesh speaks for the everyman in all of us. We’ve all worked for such bosses or studied under such teachers. We suffer because that is the way of the world.

The author offers us a portrait of many aspects of India’s society. There are chasmic imbalances between the rich and the poor, the powerful and the powerless. Ramesh guides us through the quagmire of strands of society. He reserves special criticism for characters whose greed takes them on endless journeys.

For other characters, he shows appreciation: “[Rudi] was just another spoiled rich boy to her, rather than the fount of all knowledge. She was one of those true believers in the law, one of the Central Bureau people who were totally incorruptible, completely resistant to government pressure—and that was something so unlikely it was like an election without ballot-stuffing. Unbelievable.” With Ramesh as our guide, we’re sure to navigate through Delhi unscathed but richer for the experience.

Raina lets Ramesh air multiple complaints about the West, and the backstory provides more details than necessary for some readers. However, How to Kidnap the Rich is fresh and surprising. The novel draws us a picture of modern India even while winking to remind us that real life doesn’t usually get quite this bad.

In the meantime, riding Ramesh’s coattails provides a roller coaster ride through jealousy, greed, hope, betrayal, and persistence. Ramesh has to quickly learn to think outside the box. A novel such as this one places the readers outside the box as well, offering a vibrant, unusual story in return. No matter the zany solution Ramesh chooses, we travel alongside him, cheering him on.