How God Became God: What Scholars Are Really Saying About God and the Bible 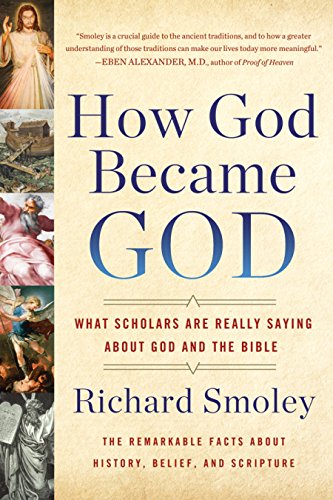 “How God Became God is an excellent tool for furthering spiritual development.”

For anyone other than a Bible scholar, Richard Smoley’s How God Became God: What Scholars Are Really Saying About God and the Bible will provide quite an education.

It is well known that in recent decades, researchers have made discoveries that seriously weaken the factual accuracy of Biblical statements. In Smoley’s introduction, he points out various reasons why, though most well educated clergy have studied these findings, they and others “in the know” are reluctant to present them to the general public. Among these reasons is concern over upsetting the apple cart—leaving people adrift once their scripture-based belief system has been stripped of literal meaning.

Smoley deals with this problem in a most responsible and intellectually honest way. Rather than soft-pedal the findings to pander to a fundamentalist’s need for certainty or distort them to suit a strictly materialist worldview, Smoley offers a frank discussion untainted by any form of ideological bias.

In presenting the various Bible scholars’ findings, Smoley very clearly differentiates between those points on which most scholars agree—which may therefore be considered factual—from those on which various scholars disagree. Also he very clearly alerts the reader when he is offering thoughts and conclusions that are the result of his own work alone, thus allowing the reader to assess the evidence independently.

How God Became God explains how several of our common religious understandings originated as entirely different notions in a completely different cultural milieu. Smoley traces how those models may have morphed over time into the literal and mechanistic views many Christians hold today.

While the doctrine of penal substitution is accepted by most of Christianity today, “redemption” is one concept whose interpretation has suffered over time. Of the current understanding held by most Christians today, Smoley says: “Evidently God had to send down part of himself to earth to be tortured to death. Thus in some way God managed to make [the sins of humans] up to himself . . . This explanation is ludicrous.”

Even the idea of God Himself has morphed down through the ages from something completely different to the way most Westerners see Him today. Smoley’s derivation is far too complex and too nuanced to summarize here. In fact this is a part where more than a few readers may have difficulty following some of the logic.

Suffice it to say that Smoley’s explanation involves the idea of hypostasis, an attribute (usually of God) that takes on a life of its own, and becomes a kind of independent entity, a personification. It also involves appreciation of the fact that ancient Hebrews saw a much closer connection between an entity and the name it is given than we do. This has led to confusion by later cultures between Yahweh and El, the high god of the Canaanites, between the Son of Man and the Great Angel.

Smoley also describes how the concept of the Holy Trinity became a fixed part of Christianity no earlier than the fourth century CE, but it actually is part of “a genuine, profound and universal teaching” common to ancient peoples “almost everywhere, under different names.” The Chinese, Hindus, Jewish mystics, and the ancient Slavs all honored the universal motif of a sacred ternary.

There is a wealth of knowledge to be gained in How God Became God. Even lettered Bible scholars will benefit from the hugely enlarged perspective Smoley suggests and the meaning that can be drawn from his insights. One example is the recognition that the story of Adam and Eve cannot be accepted in a literal sense so long as one limits perspective to what actually happened on planet Earth within the time frame of history.

Smoley offers a theory that what he calls Cosmic Man (who is “all of us,” the source of our unity and connection) was once a complete unity in Eden, a metaphorical “place” not found in the physical world. At some point Cosmic Man wishing to experience the difference between good and evil, fell from Eden, and was shattered into countless pieces. This Fall gave rise to the physical world we know today, where it appears that we are each separate beings whose task it is to remember our original unity and at some point begin to return to it.

Whether or not a reader can fully accept the above explanation, Smoley’s ocean analogy is particularly helpful. If we limit our perspective to what is evident on the surface—of the ocean and of scripture, we miss a large portion of a deeper reality, namely the unseen worlds mystics have perceived throughout the centuries. “Anyone with any sense knows that the world is full of things that . . . cannot be explained by conventional means.”

The real genius of How God Became God arises out of the thought processes toward which Smoley directs his readers. He invites them to dispense with the need for the literal interpretations of any given religion, and find instead the truths that lie beneath the surface. He advocates for finding meaning in life that is founded on the deeper universal truths that can be gleaned from almost any spiritual text while also according respect to the authority of individual spiritual experience.

In as far as the move beyond literalism toward more personal and more universal religious and spiritual understandings is the general direction in which an earnest spiritual search will tend to lead a person, Smoley’s How God Became God is an excellent tool for furthering spiritual development.