How Fascism Works: The Politics of Us and Them 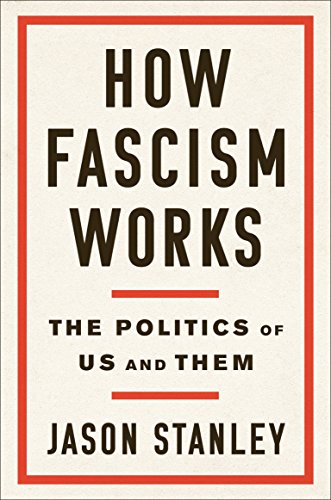 The title of this short but important book is a bit off. Jason Stanley, a professor of philosophy at Yale, does not analyze fascist state-craft: the inner mechanisms and operation of fascist governments. How Fascism Work is a study of the ideological make-up of fascist politics, broadly conceived.

Stanley examines how modern authoritarian and nationalist—“fascist,” if you like (Stanley obviously does)—political movements succeed in using and subverting “democratic” politics and elections to gain power. He finds 11 common themes and patterns connecting these movements (a shocking number of which hold state power in the world today) past and present:

1. Invocation of a mythic national past marked by racial, ethnic, religious, and/or cultural purity—a supposedly glorious history to which the nation needs to return.

2. Propagandistic use of outwardly virtuous ideals (including anti-corruption, democracy, liberty, and free speech) to advance abhorrent ends that contradict those ideals.

3.  An anti-intellectual assault on, education, universities, science, expertise, and language that is commonly accompanied by charges of “Marxism” and “political correctness” and the advance of simplistic nationalist and authoritarian ideals.

4. An insidious attack on truth and peoples’ ability to perceive and agree on truth.  “Regular and repeated obvious lying” is combined with the advance of conspiracy theories and the promotion of “news as sports” and demagogic strongmen as “stars.”

5. A virulent faith in “natural hierarchies of worth” and a rejection of equality as dangerous, unnatural, “Marxist,” and liberal delusion and subversion.

6. An aggrieved sense of victimhood among dominant groups who feel threatened and humiliated by having to share citizenship, resources, and power with minority groups.

7. An “oppressive nationalism” devoted to maintaining “natural hierarchies” and uniting “chosen” but supposedly and unjustly oppressed racial, ethnic, religious groups (whites in the U.S., Christians in Hungary, Hindus in India, etc.) against the nefarious incursions of supposedly inferior others.

8. A stern “law and order” politics that targets minority others (“them”) as criminal threats to the safety and security of the majority (“us”).

9. Sexual anxiety about the threat supposedly posed by minority, criminal, and alien others (“them”) to “our” traditional male roles and status and “family values.”

10. Distrust of socially diverse, “corrupt.” “impure,” weakening, parasitic, and criminal cities combined with love for the purported superior virtue, strength, “self-sufficiency,” and racial-ethnic “purity” of the rural countryside, home and “heartland” of the “volk” (the true ancestral people and the spirit of their once great nation).

11. A sense of the “chosen” people and majority (“us”) as hard-working, upright, virtuous, and “deserving” combined with the notion of demonized minorities and others (“them”) as lazy, dissolute, shifty, and “undeserving.”

German and Italian fascism in the 1920s and 1930s channeled each of these noxious themes, which are strikingly present in authoritarian and nationalist parties and regimes across the world today. This ugly recurrence is a chilling validation of the Spanish philosopher George Santayana’s famous warming that “those who cannot remember the past are doomed to repeat it.”

Not content merely to describe fascist political themes, Stanley explains them largely as a reflection of harsh socioeconomic disparity. “Ever since Plato and Aristotle wrote on the topic,” Stanley writes, “political theorists have known that democracy cannot flourish on soil poisoned by inequality . . . dramatic inequality poses a mortal danger to the shared reality required for a healthy liberal democracy . . . [such] inequality breeds delusions that mask reality, undermining the possibility of joint deliberation to sole society’s divisions.”

Particularly perceptive is Stanley’s reflection on how the political culture of duplicity and insincerity that is generated by modern capitalist inequality creates space for fascist-style politicians to “appear to be sincere” and to “signal authenticity” by “standing for division and conflict without apology . . . Such politicians,” Stanley argues, come off to many jaded citizens as “a breath of fresh air in a political culture that seems dominated by real and imagined hypocrisy.”  Fascist politicos’ “open rejection of democratic values” is “taken as political bravery, as a signal of authenticity.”

Stanley counts his own home country, the United States, among the depressing roster of states (including Hungary, Poland, Turkey, India, Myanmar, Russia, and the Philippines), where “fascists” currently hold high elected office (Stanley could have added Ukraine and would now likely bring in Brazil) and state power.  In numerous places throughout How Fascism Works, Stanley shows how the self-declared “nationalist” Donald Trump and the Trump-captive Republican Party checks off the boxes on the author’s list of fascist beliefs and narratives.

Some readers may be understandably put off by a certain rhetorical flattening of history in How Fascism Works. Stanley quotes the U.S. Confederacy’s Vice President Alexander Stephens (speaking in 1861),  Adolf Hitler, Joseph Goebbels, and other leading German Nazis (from the 1920s through the 1940s), and contemporary fascist-style politicos and activists (including Hungary’s Viktor Orban, Turkey’s Recep Erdogan, France’s Marine Le Pen, German’s Alexander Gauland, and the United States’ Rush Limbaugh, David Horowitz, Steve Bannon, and Donald Trump) all in the present tense, without any apparent concern for the changing and diverse historical circumstances that have given rise to different sorts of fascist politics and actors in different places and times.

Stanley makes little effort to situate contemporary fascist politics in the historically specific context of the long and inegalitarian neoliberal-globalist era (1975 to the present). Doing so would have put some welcome historical and empirical meat on the bones of his discussion of current fascist politics and his rooting of those politics in inequality. This a gap though not necessarily a flaw. It suggests a future project for other researchers. Stanley is a philosopher, not a historian or a political scientist or sociologist. Ideas are his main quarry in the academic division of labor, and here his book is a brilliant triumph.

Recommending it for many, How Fascism Works is well and concisely written, making it accessible both to undergraduate students and a broad popular audience beyond the ivory tower.