How Emily Saved the Bridge: The Story of Emily Warren Roebling and the Building of the Brooklyn Bridge 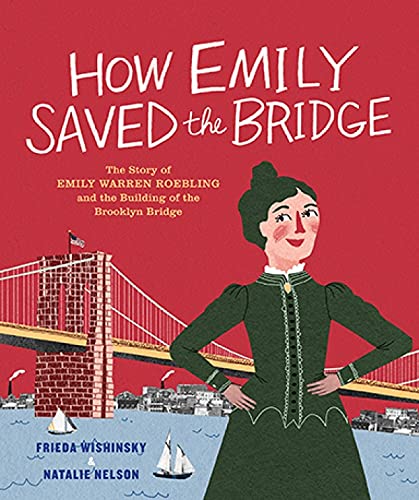 Few people know that the iconic Brooklyn Bridge was built by a woman, Emily Roebling, who took over the construction project after her husband was seriously weakened by his own work on it. Now there are two picture books trumpeting Emily's key role in finishing the ambitious bridge, How Emily Saved the Bridge by Frieda Wishinsky, and Secret Engineer: How Emily Roebling Built the Brooklyn Bridge by Rachel Dougherty (also published this spring and reviewed at NYJB).

The two stories provide interesting comparisons. The technical descriptions of caissons and suspension cables are more clear in Dougherty's book, but the story of Emily's determination is more dramatic and inspiring in Wishinsky's. The playful illustrations by Nelson help make the long-ago 1880s feel candy-colored vivid. And the use of dialog in speech balloons lightens the story, making it fun and accessible.

Wishinsky hits all the right historical notes with careful accuracy while still molding the story to have direction and focus. She does stray a bit from the point with a page about another company's inferior cables, but the detour ends up demonstrating the integrity and high standards of Emily’s husband's company. The framing device of a parent telling this story to her child could have easily been cut as unnecessary, but that distraction is quickly over, and the reader is plunged into Emily's story from an ambitious girl, dreaming of an education to a woman of impressive achievements.

The book ends with Emily going to law school, another unusual and “unladylike” pursuit for young women of the time. It's fitting that this strong woman literally gets the last word: “It's ladylike to have dreams and work hard. That's what I've done. That's what I'll always do.”

Some librarians and teachers take exception to this kind of invented dialogue, but if it's true to the history and helps the reader relate to the character, it seems a minor price to pay to get kids interested in history. The book doesn't have an extended author's note or timeline, another aspect adults may find lacking, but it does offer “Six Amazing Facts About the Brooklyn Bridge.” The seventh amazing fact, of course, is that its creation was overseen by a woman, a story well told in this handsome book.