How Do We Look: The Body, the Divine, and the Question of Civilization 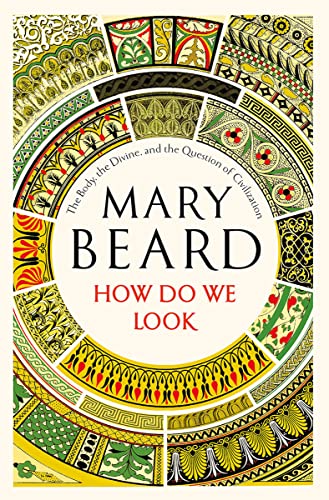 "Beard avoids the temptation to lecture on what the author imagines as the meaning of the image. How Do We Look explores not how others interpret but raises questions about how we perceive."

Professor of Classics at Cambridge University Dame Mary Beard defends How Do We Look as a book that reverses E. H. Gombrich's remark that art does not exist only artists. She chooses "putting the viewers of art back into the frame."

"Unashamedly selective," the author in this short, extremely well illustrated (in color) volume, covers "thousands of years and thousands of miles" to look at perceptions in one (sound), two (painting), and three (statues) dimensional works.

In the first half of the book, Beard looks at human views of the body, for example, "the female nude implies the existence of a predatory male gaze" but sometimes in conflict with biology, "the question of civilization” hovers over much of the book. Even a useful decorated artifact tells much of a people in a universal language of the senses. A wine cooler, for example, has decorations for "telling the Athenians how to be Athenians."

Part two discusses "how all religions" "faced irreconcilable problems in trying to picture the divine." Understanding how sites such as Ajanta, mosques, and Angkor Wat works "turns out to be more complicated than we can imagine." Death serves to engage the deceased with the viewer but also speak of the divine, an "encounter" "that we can, if we try, still share."

The author offers the implications of the most logical questions, for example, about giant Olmec heads "how were they seen and understood"? Why, in ancient Athens, did the viewer confront "paintings and models of human beings," "almost a parallel population"? What brought on "the Greek Revolution" where "sculptures appear to spring to life," such as of "an elderly battered and bruised boxer"?

Beard avoids the temptation to lecture on what the author imagines as the meaning of the image. How Do We Look explores not how others interpret but raises questions about how we perceive, such as in "advertising to the people who viewed them for how they should be, act, look."

Beard argues for "social realism as being something invented in antiquity" and the influence of the ancient world is not something that is stuck safely in the remote past." That influence comes through even in works like the Olmec wrestler, possibly a fake artifact that reflects a genuine idea.

The iconoclasts would destroy specific pieces of art because of the ideas perceived in it. Treasure hunters and archaeologists sometimes unintentionally did the same.

"A lot depends on who's looking" and at what. With the statue of Egypt's Amenhotep, for example, "you might experience a moment of wonder" at the "surprising fact it can sing." The thousands of individually made soldiers in the tomb of China's Emperor Qin "are likenesses of no one" but "mixing a fairly restricted repertoire of elements."

The title of the book How Do We Look could also refer to the physical quality of the book itself. Its design, use, and style harken back to the concise, entertaining, well-made, solid little books popular a few years ago. In that, Beard again explores a means of perceptions (and a practical meaning of educating.)

How Do We Look does not have footnotes but each chapter has a detailed bibliography. If your summer vacation proved a disappointment, make this little book your consolation.