How to Disappear: Erase Your Digital Footprint, Leave False Trails, And Vanish Without A Trace 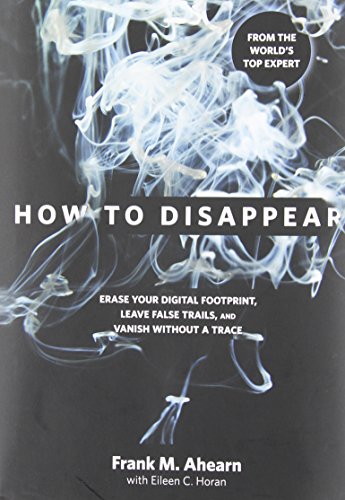 “Colorful” is the first word that springs to mind with authors Frank M. Ahearn and Eileen C. Horan’s first book, How to Disappear: Erase Your Digital Footprint, Leave False Trails, and Vanish Without a Trace. With enough four-letter words to make a teenager blush, the pair outline how one could hide in a modern, networked world like today—how to disappear in plain sight.

If you’ve not heard of the duo, you’ve assuredly heard of their work—it was Ahearn who, in 1997, was hired to find the intern at the heart of the President Clinton scandal—and it was Ahearn who found Ms. Lewinsky. That’s just the most well known of his exploits, which are numerous and well documented, and make many guest appearances in his book.

The authors are “skip-tracers;” and if you’re unfamiliar with the term, Ahearn and Horan provide the following description:

Skip tracer: a person who tracks people down and uncovers private information for a living. Targets include jailbirds, deadbeats, subpoenaed witnesses, and just about anyone else who’s trying to hide.

And the authors are commonly regarded as the best in the business. After reading this book, you’ll most likely agree with that assessment.

Shakespeare, the authors are not. They are, however, extremely resourceful and entertaining. In one of their many descriptions of how to disappear, they describe in detail how, by using four private mailboxes, one can ensure that anyone trying to track you will have to spend thousands and chase down countless leads while you are safely elsewhere. The device is so crafty that Ahearn notes, “It will confuse and frustrate your pursuers. I bet it took you a few readings to understand, too.” He’s right.

Having reviewed similar books, one issue when reading a book like Disappear, is that the methods often seem to be from the Cold War and, thus, outdated. However, the authors devote a healthy amount of time to email, unsecured wireless networks, and social websites—Facebook even makes a brief appearance.

Another issue with such books are that the offered solutions often seem outlandishly improbable, but that’s where Ahearn’s years of experience makes Disappear ring true. For example, he’s constantly admonishing the reader to not assume a fake identity, as it just doesn’t work; far better, he says, to use your real identity but just leave less of an identifiable footprint.

Some of his methods border on paranoid; his instructions on how to destroy digital information is, after physically damaging it in a number of ways, to “[t]ake your hard drive out of the freezer, drive it to the nearest ocean or large body of water, and toss it in. Yes, it’s littering. Go plant a tree, and you’ll feel better.” There are any number of NSA quality software tools to wipe out a harddrive so that unearthing information will be near impossible—and without adding to landfills and littering. But Ahearn has a healthy distrust of anything that runs on electricity.

His other warnings come off as a bit too simplistic, such as when he says, “Don’t be a moron about your privacy,” but he balances this with examples of people doing such dubious activities as giving personal information over a mobile phone in a crowd. So it’s hard to argue with him on the point.

Finally, Ahearn and Horan have seen a lot in their time as skip-tracers and have one chapter entitled “Disappear from a Stalker,” which is both practical and urgent. The reader gets the sense that the two earnestly want to provide such victims the tools to get on with their lives.

Whether you’re simply interested in the topic or are in the unfortunate position to need to disappear, few books offer what How to Disappear provides. Just take the author’s advice and buy the book with cash or an untraceable prepaid credit card.