How to Build a Human: In Seven Evolutionary Steps 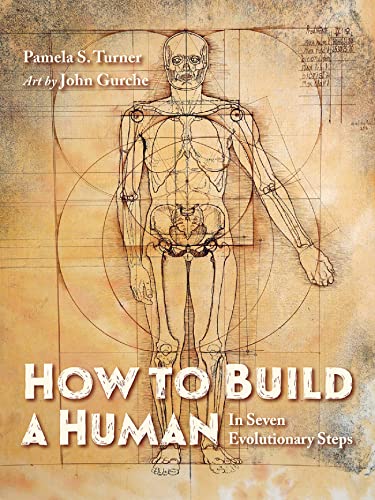 “Far from a stuffy, dusty story, Norman gives us an exciting scientific thriller . . .”

Pamela Turner does more than tell the story of human evolution in How to Build a Human. She takes us on a tour of the characteristics that make for essential humanity, from walking to making complex tools to telling stories. Along the way, she introduces us to a large cast of hominin species, from the Handy people to Neanderthals and many others. While many of these species lived at the same time, ultimately only one species, Homo sapiens, survived to populate the Earth. Why did Homo sapiens continue when the others went extinct? Turner doesn’t have a definite answer but offers compelling reasons, as she does throughout a book that has to rely on some speculation, the fossil record being incomplete as it is.

In clear language, Turner lays out why our species was so successful, including “They were not picky eaters” and “They stuck together.” As she describes: “Our earliest ancestors needed intelligence to make and use tools. They also needed brainpower to navigate their social lives.”

This leads to the need to communicate, especially to teach, to pass on important information so it’s not lost or forgotten. Gossip is included as essential information since it helps construct a social framework. So the human need to gossip is ancient indeed. This is one of the nuggets this book is stuffed with, little gems of information that make the ancient feel very contemporary. Far from a stuffy, dusty story, Norman gives us an exciting scientific thriller: Which species will succeed and why? How can different qualities be used for survival of the group?

There’s clear scientific and archeologic data woven into the dramatic story being told, creating a compelling nonfiction narrative. This is science and history and archeology, all woven together seamlessly into the overarching story of human evolution and development as a species. Turner clearly knows her anatomical science, her crows, and her genetic analyses, and uses them all as tools to elaborate the picture she paints. But in all this her language is conversational, the tone full of warmth and humor. There’s much here to engage younger readers, to fascinate them and spur them to ask further questions. Fortunately, there’s ample backmatter with additional material for those who want to know more.

The book ends with prehistoric cave art, specifically the handprints found in caves in Indonesia, Spain, Australia, Africa, the Americas, and France. This urge to literally make marks is essentially human:

“So please take one final look at those hand stencils. The people who made those images never met. They were separated by thousands of kilometers of forest, desert, savanna, mountain, jungle, and ocean. They would not have spoken the same language, eaten the same foods, or dressed in the same clothing. They would not have told the same stories. Yet those ghostly hands tell us something important. We are one. One species. What unites us lies deeper than what divides us.”

There’s much in this book to celebrate. Affirming something deeply positive about humans is a message we all need to hear more often.