How to Become a Really Good Pain in the Ass: A Critical Thinker's Guide to Asking the Right Questions 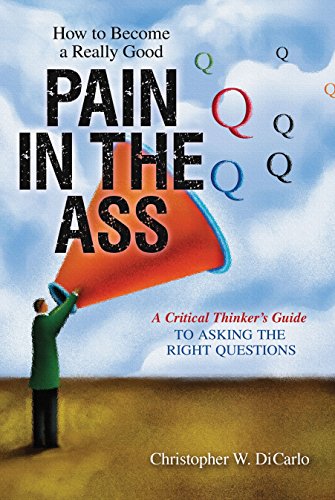 “Professor DiCarlo’s contribution is not to be a pain in any body part, but rather to write on methods of argumentation and criticism; and to answer important questions.”

Do you aspire to become a pain in the ass by challenging the arguments of others? That is the tongue-in-cheek objective of How to Become a Really Good Pain in the Ass: A Critical Thinker’s Guide to Asking the Right Questions. In all seriousness, the book is a set of treatises on critical thinking, and existential questions. And it concludes by arguing against religious points of view, particularly on topics behind policy debates such as teaching alternatives to evolutionary theory in schools.

Christopher W. DiCarlo is an academic who teaches college courses on critical thinking. There was a time when the whole point of liberal arts education was to teach critical thinking. Today it appears that not all college graduates learn to do it. Professor DiCarlo’s contribution is not to be a pain in any body part, but rather to write on methods of argumentation and criticism; and to answer important questions. He compliments Socrates as one of the best pains in the ass because “he would force members of his society to consider matters that they believed were of the highest importance.”

Really, Professor DiCarlo has written two short monographs that are connected by an essay. The first monograph is on argumentation and critical thinking, the connecting essay is on Socrates and skeptic philosophy (the author seems to be a big fan of Sextus Empiricus), and the concluding monograph considers the questions of what can I know, why am I here, what am I, how should I behave, and what is to come of me?

The first monograph is a very clear exposition on logical argumentation, and how to spot flaws in an argument. It is organized alphabetically, by Argumentation, Biases, Context, Diagramming, Evidence, and Fallacies. Conveniently, this order of presentation makes sense much of the time. But the author might well have skipped a chapter on B, as the biases he enumerates fit more convincingly into the sections on evidence and fallacies, or perhaps into a separate discussion on objectivity.

If the point of this book is to address a fairly sophisticated audience, one might question Dr. DiCarlo’s assertion that if-then statements are the only method by which one may present a logical argument. Are we to say that great scholars such as Thucydides, or Hegel, or Roland Barthes are not critical thinkers because they were not positivists? Though some philosophers believe that all of the important questions have been solved, the nature of empirical truth is still subject to debates between people like Willard V. Quine and Saul Kripke. Perhaps objective knowledge is more ambiguous than Dr. DiCarlo would have us believe.

This work does not present alternative methods of argumentation and inquiry; and that is more evident in the last section, which considers the Five Big Questions from natural and supernatural standpoints. Much of the natural response seems to be a pointed rejoinder to those who would denigrate evolutionary theory from a religious standpoint, or indeed to those who are religious at all. The possibility that one might take both a natural and supernatural—most would label them rational and religious—view of life, and find little problem in holding both views at once, is raised as a possibility in this book, but it is given short shrift and then attacked in the penultimate chapter.

The final section on philosophical questions contains many interesting discussions. But the answers will not be a great surprise to anyone. These questions may be the basic questions of philosophy, but do not seem terribly interesting. Nonetheless, some of the discussions of the Big Questions are amusing.

In answering “what am I,” for example, the author informs us of eight mass extinctions in the history of our planet. The Permian extinction wiped out 90 percent of marine life and 70 percent of terrestrial life; and it took 10 million years for our ecosystem to recover. Thus, he suggests, when we ask the question of what am I, “we must, at least on some level, respond by saying: extremely fucking lucky.”

From his list of publications, it seems that Professor DiCarlo is a true Renaissance man. He is able to draw upon and synthesize diverse academic research and disciplines. It is often a pleasure to read the general worldview of such scholars, and many will find that the way he makes sense of the world is informative and helpful.

His views on complexity and randomness are convincing, but the author goes a bit too far in his role as Renaissance man when he presents his own Onion Skin Theory of Knowledge. OSTOK is basically a statement that cultural and natural systems result in complex outcomes, which are the product of too many variables to name affected by random chance. It is an interesting worldview, but not a theory, or even a rigorous argument by the standards set in the beginning of the book.

Who will want to read this book? Those who have had some taste of critical thinking may find it overly simplistic, and those who have religious belief systems will probably ignore it. The politicians who are cited in many instances are also unlikely to study this book (who has ever been elected on the basis of logical arguments?), but perhaps we should consider a people’s referendum to force politicians to read it. We might even go further, and mandate electric shocks for any legislator who does not follow the principles of logic the book explains. Either our policies would become much more sensible, or it would obviate the need for light bulbs in cities such as Phoenix.

Critical thinking is an important part of life. It is not for everything or everyone. There are many modes of rigorous thinking aside from the philosophy of the skeptics, and there are many modes of argumentation that are (depending on the context) more useful that rational positivism. The next time you have an interpersonal conflict with your partner, try resorting to logical argumentation. And, since you’ll have much more time to write emails when you’re single, please let me know how it went.