How to Be an American Housewife 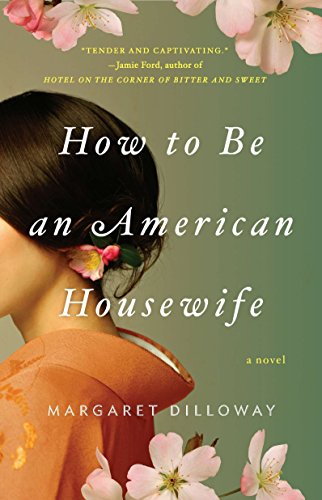 “The person I used to be could have only made one choice; the grown-up (me) might have made a different one. That was how life was. You only figured out the right thing after you were old.”

This is a finely told story of two persons and two cultures. It may well appeal to those who loved Hotel on the Corner of Bitter and Sweet by Jamie Ford or The Commoner by John Burnham Schwartz. The many fans of Lisa See are also likely to be drawn to it.

This is first, the story of Shoko, a young woman in Japan at the end of World War II who marries an American G.I.—one of the many occupiers of her island nation—and then moves with him to San Diego. In the USA she finds great prosperity, but also some loneliness accompanied by discrimination. Her transformation is assisted by a guidebook, printed in Japanese and English, labeled How to Be an American Housewife.

The character of Shoko is based on the life of the author’s mother, Suiko O’Brien, who told Dilloway that, “her life would make a great book.” It does, and Suiko relied on a book that her American husband had given to her called The American Way of Housekeeping.

The second story is the tale of Shoko’s southern California-raised daughter, Sue, a character who might be reflective of some of the author’s own experiences growing up. Sue is a divorced mother who perhaps does not properly appreciate her own mother until Shoko begins to experience serious health issues. Shoko understands that her time on earth may be short and she wants nothing more than to visit her estranged brother, Taro, in a village in Japan, one not far from Nagasaki.

As children, Taro and Shoko were told that they shared the blood of the Emperor’s royal family. When Shoko, attempting to live on her own as a young woman, begins to spend time with a lower-caste man, Taro sees this as bringing shame on their family. He vows to never forgive her, and Taro also hates the Americans who bombed Japan; thus, Shoko’s marriage to an American (a “Charlie”) is another sign of Shoko’s betrayal to family and Japan.

Once it’s determined that the elderly Shoko needs a life-saving heart operation, she is set on convincing Sue to visit Japan in her stead. She wants Sue to find Taro and deliver to him a request and a message. This may be the final thing that Shoko asks of her daughter, and Sue elects to honor her mother's wishes.

On one level this is about persons of one culture trying to find acceptance and peace in another one, one that is initially alien (“San Diego had become a foreign nation . . .”). This is true of a Japanese woman suddenly transported to the U.S. and of her daughter who, several decades later, finds herself in older parts of Japan. Shoko eventually finds the peace to be able to state, “I became an American . . .” Sue makes a transformational journey to Japan with her own daughter, and finds that she’s “homesick” for a place she’s never been to before.

On a second level, this is about the interest and spice that’s added to life when one accepts cultures, and the habits, traditions, and foods of “the others.” In the end, the differences between us add to our experiences rather than subtract from them. Dilloway’s story is a much-needed tribute to multiculturalism. It is a story that is an extremely effective one precisely because it includes examples of the sad destruction brought about by hating and fearing those who are different from us.

And finally, this is a tale of forgiveness. It is one thing for Taro to be asked to forget the mistakes he and his sister made when they were young; it may be another to ask him to forgive a nation whose planes shot at him and dropped bombs on his village during the 1940s. Yet, because Shoko married an American serviceman the issues become joined in his mind and heart.

The best scene in How to Become an American Housewife is the one in which Sue’s Japanese relatives take her to visit the Peace Park in Nagasaki, ground zero for the dropping of the second atomic bomb. When the bomb exploded over Nagasaki, Taro and Shoko were close enough in their nearby village to see the lights from the explosion and hear the sound. As Sue walks through the park, she comes to understand the horror of war, the terror of how it ended, and the fact that nothing can change the past.

Dilloway’s characters come to understand, as we all must, that the pain of yesterday is no reason to destroy the present. This debut novel is a fine tribute to one woman, a mother, who lived a true and large life. It is also a tribute to the best characteristics of people in two very different countries who, separately yet together, seek to find comfort within the noisy turbulence of life.