In the Houses of Their Dead: The Lincolns, the Booths, and the Spirits 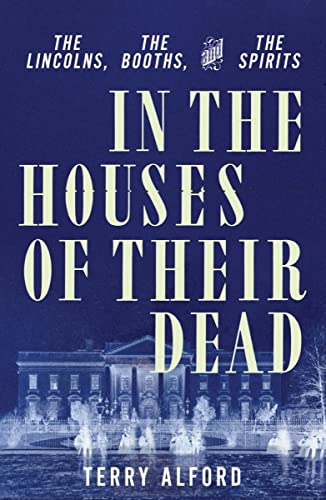 “Alford tells the remarkable story of spiritualism as it affected the lives of the members of the respective families of Abraham Lincoln and his assassin John Wilkes Booth.”

“Although they lived in the same country,” Terry Alford writes, “the Lincolns and the Booths resided in different worlds.” Both families did believe in the supernatural world of ghosts/spirits, as the author explores in In the Houses of the Dead. This all played out as Abraham Lincoln and the surprisingly similar John Wilkes Booth discovered Shakespearean drama and irony in the theaters of Washington as the Civil War raged as background.

In the Houses of Their Dead tells the epic story of Lincoln’s America through parallel histories of these two families that shared nothing but their times, the theater during the Civil War, and America. Abraham Lincoln’s family, formally from Kentucky, Indiana, and Virginia, lived in poverty on the hardscrabble Illinois frontier. Its most famous member spent his life escaping from his past.

John Wilkes Booth’s family, only barely a generation in America, made performing their family business. Their success became legendary although overshadowed by John Wilkes Booth’s shooting of President Lincoln as Abraham and his wife Mary Todd attended a comedy performance.

The Lincolns greatly admired the Booths as actors but, otherwise, the two families only barely connected. Abraham Lincoln had once handled a case for the family of the Booths’ friend comedian Joseph Jefferson. John Wilkes Booth and Mary Todd Lincoln both knew spiritualist medium Charles J. Colchester only too well. Colchester even tried to warn Lincoln of the assassination plot!

London-born Junius Brutus Booth, father of John Wilkes, “established himself as a force on the American stage” after leaving behind a failed marriage and troubled career in Great Britain. His mental instability became legend.

“No profession could be more destructive to a person of Booth’s sensibilities” than the theater for which he earned fame and fortune, as it did for three of his sons and his son-in-law. He also had an alcohol addiction that made him a violent drunk.

The large family that Junius Booth fathered belonged to and enjoyed urban America and the best that it could offer. Making their home on a farm worked by African Americans in Maryland, the Booths only “sought the rural life in order to restore mind and body” as demanded by this dominating head of the household.

No family is stereotypical but all are made unique by the individual members. John Wilkes Booth, the author argues as an example, had personal issues that find more understanding in a psychological analysis than a study of the practices of the occult. He had deep un-Booth-like political beliefs that could appear psychotic. Unlike some other authors, Alford paints a sympathetic portrait of the rough frontiersman Thomas Lincoln, Abraham’s father, and of Abraham’s sometimes challenging marriage.

In the Houses of Their Dead also tells of how these two different families “lived in an era of remarkable progress”; “people traveled faster, read more, ate better, and lived longer.” “Millions of Americans clung to beliefs that seem irrational,” however the times encouraged such ideas by the amazing new technical advances.

In their respective American societies, people “studied omens, dreaded comets, and feared witchcraft.” “Apocalyptic writing flourished, and credence was given to visions, spells, and curses.” “They believed in ghosts” and in omens.

“The Lincolns and the Booths were superstitious people.” Junius Booth believed he dealt with the Devil and also in spells; he consulted Gypsies. The Lincolns treated a son with a mad stone. John Wilkes Booth had a snake ring that he believed held power over him. He “always considered himself unlucky” and consulted fortune tellers. Edwin Booth attended séances.

In the Houses of Their Dead, Alford tells the remarkable story of spiritualism as it affected the lives of the members of the respective families of Abraham Lincoln and his assassin John Wilkes Booth. Two sisters created this practice of communicating with the dead in the particularly superstitious upstate New York in 1848 and profitably on tour. They took the country by storm although they admitted their fraud in 1888. Spiritualism continues to the present.

Parts of this story are in the Lincoln legend such as the séances in the White House but In the Houses of Their Dead is no Abraham Lincoln Vampire Slayer, but a serious study. The author does not preach to the reader, but he does detail the real events and the exposed frauds. Alford also tells of the role of spiritualism and Lincoln in the years after the president’s death.

Having lost two young sons, the Lincolns, already superstitious, were vulnerable to spiritualism. For Lincoln’s legions of admirers “that he might be attracted to charlatans and lamebrains of the hocus-pocus variety didn’t fit well with his image as a man of wisdom.” Lincoln even consulted a spirit cabinet of ghost advisors.

The lively prose In the Houses of Their Dead does provide colorful wordage, as when Alford describes Abraham Lincoln’s father as an “honest and social proletarian lump” “neither lazy or dynamic.” Famed actor Edwin Booth receives equal attention to his infamous brother John. Alford covers the Lincolns’ relationships with their spiritualist mediums, one of whom Lincoln made the Secretary of Agriculture.

In the Houses of Their Dead joins the category of entertaining works that succeeds in bringing the fascinating world of the Booths and the Lincolns back to our times with sympathy and understanding but not misrepresentation or moralizing. The book has annotations and illustrations.