The House of Truth: A Washington Political Salon and the Foundations of American Liberalism 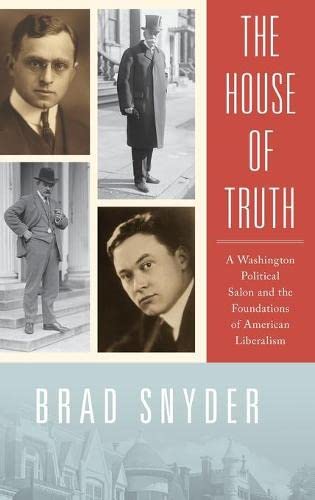 Brad Snyder’s new book The House of Truth is part intellectual history and part biography. Its focus is the group of American writers, lawyers, judges, artists, and politicians who between 1912 and 1932 sought to shape public opinion and use the law to advance progressive causes.

What they all had in common, at least initially, was a belief in government’s ability to solve or ameliorate social problems and the law’s promise of fairness and justice for all. They gravitated toward Washington, D.C., and progressive politicians like Theodore Roosevelt, Woodrow Wilson, and, later, Franklin Roosevelt.

This group of friends, Snyder writes, frequently “gathered for dinner at a row house near Washington’s Dupont Circle,” dubbed the “House of Truth.” Justice Oliver Wendell Holmes was a frequent guest at the House of Truth. “The name,” Snyder explains, “was inspired by debates between Homes and its residents about the search for truth.”

The row house became a political salon where the progressives “threw dinner parties [and] discussed political events of the day.” Frankfurter once brashly noted that “almost everybody who was interesting in Washington sooner or later passed through that house.”

Snyder, a constitutional law professor at the University of Wisconsin, describes with impressive detail the personal relationships between these progressive elites, their advocacy of progressive causes, and their quest for influence and power during the First World War, the Harding-Coolidge-Hoover era, and the beginnings of the New Deal.

Many of the progressive elites had a connection to Harvard University or Law School. Their preferred journal of opinion was The New Republic, which Croly founded and edited, and for which Lippmann and Frankfurter frequently wrote. Most progressives backed Wilson’s utopian goals in taking the U.S. into the Great War. They effectively took the reins of power with the advent of the New Deal.

Snyder’s own progressivism and liberalism are evident throughout the book. Frankfurter is his hero because he was “hopefully expansive about politics,” “stood up for free speech and fair criminal trials of radicals, immigrants, and minorities,” and “supplied the New Deal with brains and manpower.”

Snyder admires Lippmann until Lippmann becomes more conservative. He scolds Lippmann for “retreat[ing] into pessimism and detachment.” Snyder even praises Borglum, the sculptor of Mount Rushmore, for his monument to governmental power despite his association with the Ku Klux Klan.

The author is at best ambivalent about Justice Holmes who never shared the full-fledged liberalism of the House of Truth.

Snyder’s progressivism colors his history. His description of the Sacco-Vanzetti case accepts the Left’s view that the defendants did not receive a fair trial and were likely innocent.

He downplays the fact that Justices Brandeis and Frankfurter stretched and breached ethical boundaries by advising presidents while serving on the Supreme Court, and lauds their efforts to “use the courts to advance their political and legal agenda.” Judges in our constitutional system are not supposed to have a political or legal agenda.

He notes that progressives filled the ranks of the New Deal agencies, but fails to mention that many of those progressives, like Alger Hiss (who clerked for Justice Holmes) and Michael Strait (the post-World War II publisher of The New Republic), later became communists and served a foreign power.

Finally, Snyder does Walter Lippmann a disservice simply because he abandoned the progressivism of Frankfurter during the 1920s and 1930s. Lippmann became one of the most astute critics of FDR and the New Deal, and later wrote brilliant books on foreign policy from a realist perspective.

Snyder praises the progressives for vastly expanding the reach and power of the federal government. [T]he people at the House of Truth,” he writes, “were dreamers—of bigger, better government . . .” Their most lasting legacy, he believes, is the creation of a “liberal political and legal network [that] has expanded almost as exponentially as the power of the government . . .”

There is no sense here of the limits of governmental power or the danger posed by the growth of the state. The grave lessons of the 20th century are ignored.