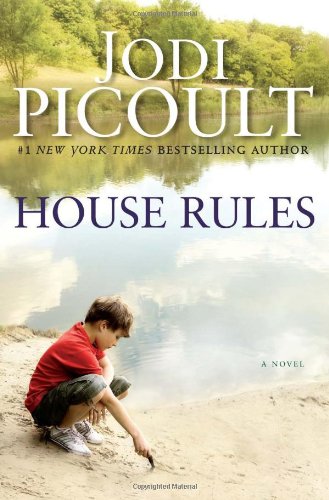 In her new novel, House Rules, Jodi Picoult serves up another courtroom drama, intricately woven through an extraordinarily detailed portrait of a family in crisis. In fact, it is a family in near constant crisis.

Eighteen-year-old Jacob Hunt has Asperger’s syndrome. He takes things quite literally. When one of his teachers leaves the classroom and tells the students, “Don’t move. Don’t even breathe,” Jacob holds his breath until he nearly passes out. He loves talking about dinosaurs, and has a fanatical obsession with forensic analysis. His favorite show is “Crime Busters,” which he watches every day at 4:30. He loves the show so much that he sets up fake crime scenes for his mother to solve.

With the aid of a police scanner, he shows up at a real crime scene and is able to deduce what happened before the police can. But when Jacob’s social skills tutor is found dead, Jacob becomes the prime suspect in a murder investigation. His nervous tics, flat affect, and inability to look people in the eye (all hallmarks of Asperger’s syndrome) look a lot like guilt to the police.

Fans of Picoult will notice right away what has become a trademark for her—the multiple first-person narrative. With five points of view (each with their own font), the novel feels device-heavy at times, particularly toward the end. The book could have benefitted from having fewer narrators. One character in particular is not important enough to the overall story to rate their own narrative.

Picoult is adept at rich characterization, which is really what the novel is about. The fact that it is set against the backdrop of a murder mystery is almost secondary (plot-wise she doesn’t truly hook the reader until a quarter of the way in). Picoult’s research and attention to detail are superb and result in passages that are absolutely breathtaking. She does not shy away from the hard truths of living with a family member with autism.

Emma, Jacob’s mother, is divorced, her ex-husband having left shortly after the birth of their youngest son, Theo. Jacob’s needs always trump the needs of Emma and Theo. His rigid adherence to routine, sensory issues, and communication difficulties make him an outcast. He is not the only one. Theo feels like he can never invite friends over because they will think his brother is a freak, and by association, they will think he is a freak, too. Because Jacob is so dependent on his mother, she works from home. Money is always tight.

Theo’s longing for a scrap of attention from his mother leads him to act out by breaking into neighbor’s homes. He is put into the role of having to be the older brother, even though he is three years younger and smaller than Jacob. The social isolation that both Theo and Emma feel is poignant, but it does seem exaggerated. A mother who has dealt with a child like Jacob for eighteen years would likely know how to find a support network of other parents.

Emma demonstrates strength and courage, doing what so many mothers of children with disabilities do—tirelessly advocating for their child with teachers, doctors, counselors, and their own family. In Emma’s case, that advocacy extends to the legal system.

Picoult is to be lauded for shining a light on how people with differences are treated in our society. Jacob looks normal, and is highly intelligent. But he has a hard time filtering out sensory stimulation, to the point where he feels overloaded and throws tantrums to try to regain control. Though his condition is eventually recognized by the judge, and he is given some special considerations, others see a legal adult who is a psychopath with no regard for others. In one of the courtroom scenes, the prosecutor implies that his inability to empathize means that he has no conscience. A parallel can be drawn between Jacob’s insistence on routine and predictability and the justice system’s struggle to accommodate differences within its own rigid confines.

When the movie Rain Man came out, a great many people came away with the impression that all autistic individuals were savants—able to do lightning-quick arithmetic in their head. In fact savants are rare. My hope is that Jacob comes across, above all, as a unique individual and not a collective representation of a developmental disorder. He has a dry sense of humor, and loves his mother and his brother, even if he can’t show it. He often longs for “just one friend.”

In this world Picoult has crafted, ordinary life does not stop, even in the midst of an extraordinary event. Children must be fed and schooled, bills have to get paid. It is not a tidy package that she delivers. Loose ends are left to hang. To a degree, the reader has to construct the whole from a fragmented narrative. But the effort makes it all the more memorable.