House of the Rising Sun: A Novel (A Holland Family Novel) 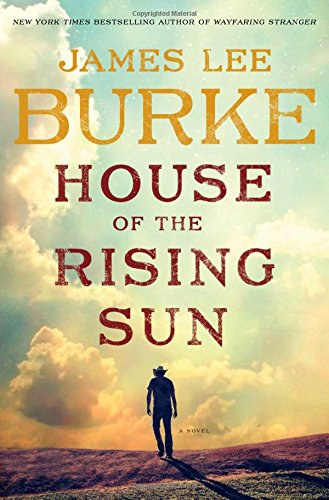 It’s 1916 and he’s in search of estranged son Ishmael, who is now a captain in the Tenth Cavalry; Hackberry isn’t having the best of days, drifting aimlessly in revolutionary Mexico. He’s barely alive, weaponless, and riding a Mexican horse on its last legs. If he thinks it can’t get any worse, he better start thinking of plan B, as he suddenly finds himself surrounded by Mexican soldiers, out for American blood after an retaliatory attack on a train left countless Mexican civilians dead.

Wisely moving on, he stumbles upon an old Victorian house now being used as a bordello, music coming from inside. To add to the surreal scene, a hearse drawn by four horses is parked outside alongside a dozen or so other horses, some with United States Army saddle bags. If the hearse wasn’t a warning to get the hell out of there, and pronto, perhaps what he witnessed next, should have been:

“Four black men in army uniforms , two of them with their trousers pulled to their ankles, all of them in their socks, their hands bound behind them, had been hanged from the tree limbs, each dying on a separate tree, as though someone had used their deaths as part of an ornamental display.”

Too late to turn and run, Hackberry is taken prisoner and tortured by General Lupa, whose 16-year-old son was killed on the train. Left to die, or left to heal so that he can be tortured again, Hackberry gets some unexpected help from a woman, Beatrice DeMolay, the owner of the bordello who seemingly knows everything about him. She appears to have a fierce hatred for Hackberry as well, yet he has never set eyes on her before this moment.

Beatrice eventually equips him with a deadly .30-40 Krag rifle and shells, informing him they belong to an Austrian gunrunner by the name of Arnold Beckman. Hearing the word gunrunner instantly has Hackberry’s interest piqued, not wanting to see the Mexican Army armed with better weaponry than the U.S, which could also be used against his son and comrades in some battle, down the line.

After a violent skirmish that leaves a handful of Mexican soldiers dead, Hackberry flees the country, carrying in his possession a stolen artifact belonging to the psychopathic Austrian. The artifact is rumored to be The Holy Grail, the drinking cup of Christ purportedly used at the Last Supper.

Enraged, Beckman vows to avenge Hackberry’s audacious thievery, and decides to make it bloody and personal, going after Ishmael, no matter how long it takes, no matter how much death and destruction he causes in that pursuit.

Despite all the bloodshed, fisticuffs, and broken bones, thankfully this is more than a novel filled with testosterone-gorged men playing battle. A trinity of intelligent women characters take center stage and are more than a match for their male counterparts—and what terrific and formidable characters they are: Ruby Dansen, Ishmael’s mother and Hackberry’s one true love; Beatrice DeMolay, the mysterious brothel madam introduced at the start of the story, allegedly descended from the crusader knight who brought the shroud of Turin back from the Holy Land; and Maggie Bassett, onetime lover of the Sundance Kid.

Told respectively in three sections—1916, 1891, 1918—House of the Rising Sun is a breathtaking saga of biblical proportion filled with captivating prose and dynamic characters. It is James Lee Burke’s finest literary work to date, cementing his reputation as one of America’s all-time masters.